Environmental and Cultural Influences in the Evolution of Early Hominid Cognition

This report analyzes hominid’s cognitive progression in relation to environmental and cultural influences. Environmental factors impacted hominid’s evolution, regarding the changing of climate and biomes. These changes caused natural selection that favored globular skulls which created a better balance of brain structures and higher cognitive abilities. Moreover, it covers the impact of cultural developments in early hominids and their influences on cognitive development. The findings suggest that culture allowed hominids to reach monumental developments, which unveiled the need for better memory and collaboration within a large group.

How the Brain has Adapted to Different Environments

Location can be one of the most impactful external influences on evolution, the reason for this being the different challenges each environment has to offer. For example, people who live in the Tibetan Mountains deal with a higher altitude and therefore have developed lower levels of hemoglobin, so they can fight against chronic hypoxia or low oxygen levels [1]. The brain is no exception for such adaptations; in some ways, the brain will evolve, so there are optimal survival rates.

Scientists have found that the East African climate had a very large influence on how the early hominids developed. There are five considerable transitions in climate during the early hominid development: the emergence of C4 biomes around 8 million years ago (8 MA) and onwards, the Messinian Salinity Crisis (6-5.3 MA), the intensification of glaciation in the Northern Hemisphere (3.2-2.3 MA), the development of the Walker Circulation (2-1.7 MA), and the Early-Middle Pleistocene Transition (1.2-.08 MA) [2]. The meshing of the geological changes greatly shaped how the Homo sapiens species and their greatest asset, the brain, developed!

The earliest known hominid, the Sahelanthropus tchadensis, lived around 7 MA.  This was also around the time where C4 biomes emerged and took over the environment. Sahelanthropus tchadensis' remnants show that brain size was around that of a modern chimpanzee (350cc) [2]. Sahelanthropus tchadensis was one of the first hominids to walk on two legs and to develop a spinal cord opening underneath the skull (the foramen magnum) rather than having it towards the back [3].3 million years later, evidence of a new hominid, known as Australopithecus afarensis, came to the surface.  Australopithecus afarensis was a bipedal hominid who was one of the first to show significant development in postcranial brain structures, which enabled primitive upright coordination skills,  indicating they walked bipedally for long distances; they had a brain size of 434cc [2].

The timing of these two hominid’s existences is critical to understanding why these adaptations took place. As previously mentioned, the Sahelanthropus tchadensis lived during the introduction of the C4 biomes. As rich, covered forests began to die, savannah plains replaced the East African lands [2]. This environmental change forced the Sahelanthropus tchadensis out of the trees, and the advantage of seeing from a high place quickly disappeared.  The Hominidae needed to evolve to survive its changing environment. As a result of the need to regain height and the advantage of seeing further, Australopithecus afarensis learned to walk on two feet instead of four. For the Australopithecus afarensis to accomplish this feat, the cerebellum (a postcranial structure) also needed to grow [2]. This adaptation enabled better balance and the ability to walk for prolonged periods of time. This adaptation was not only beneficial to hominids for height advantage, but also allowed them to partake in persistence hunting that greatly increased their chance of survival. Persistence hunting is a method of hunting where the predator chases the prey until the prey is too fatigued to continue running away from the predator. This method of hunting was very successful in relation to other methods during early hominid times, showing a 50% success rate [4].

Furthermore, the fluctuation of prey and predators, due to the environmental changes, caused further progression of the brain to ensure survival. The Hominidae family are omnivore creatures, and this has given them a lot of leeways when it comes to food sources. Hominidae can hunt, scavenge, and partake in kleptoparasitism: a form of feeding in which one animal takes prey or other food that was caught, collected, or otherwise prepared by another animal, including stored food [5]. This means that hominids are less likely to become extinct due to starvation. The strict diets of carnivores and herbivores do not allow for variability; thus, their food options are considerably smaller than the average population. When meat or vegetables become scarce, they quickly begin to die off. The omnivore plasticity has allowed hominids to reside in a multitude of environments. As a result, hominids from different regions exude different adaptations.

The Neanderthals maintained an elongated shape, which averaged around 1500cc,  and this resulted in most of the differences between the two species [7]. Because of the colder climate, the Neanderthal ancestor’s biggest challenge was keeping warm and learning how to hunt larger, fatter prey. Their evolutionary route favored bigger and stronger features. The shape of their skull was more elongated so that there might be more muscles in the neck to act as some sort of protection and support [8]. Since there is no other reason for the brain to be shaped in this way, it is assumed that Neanderthal brains evolved to fit the skull.

The Homo sapiens mainly lived in eastern North Africa and, as a result, have a different evolutionary history. It never got cold enough for Homo sapiens to adapt in the way that the Neanderthals did. After the split from Homo antecessor 800,000 years ago, Homo sapiens began to develop more globular skulls that created room for bigger brain structures in the frontal lobe, temporal lobe, cerebral cortex, cerebellum, and occipital lobe (see Figure 1) [9]. This helped them to communicate more effectively, to have a greater understanding of certain actions, and to have overall better coordination. This change was likely due to the environment being more diverse, allowing more predators to live alongside Homo sapiens. Consequently, this meant that there was a considerable amount of competition for food. Without these adjustments, Homo sapiens would have gone extinct [9]. 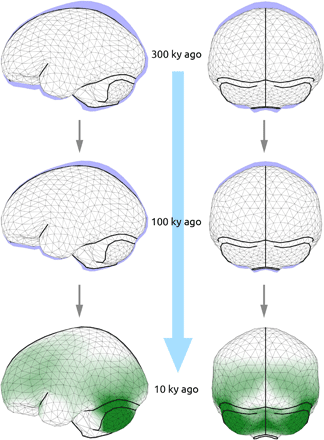 How Culture Has Evolved Alongside Cognition

As Homo sapiens developed their globular skulls and larger brain structures, humans began to show signs of higher cognition levels, including tool making, controlling fire, and creating a complex social structure [9]. This development of higher cognitive levels not only improved the early hominids' chances of survival but also had a huge impact on the interaction within their communities. By looking through the advances humans have made in tools, the progression of new behavioral and cognitive capabilities can easily be seen. Researchers have been using a process called the châine opértoire approach to describe the process of Paleolithic tool production. The châine opértoire approach involves the reconstruction of action chains, usually in a flow-chart format [10]. This method has provided the formal description of Paleolithic tool production, creating a very sturdy foundation for many avenues of research in the evolution of man. Some of these areas include hierarchical structure in motor control, functional neuroanatomy, and social transmission [11].

Around 2.6-1.4 MA, the first tools created by man started to appear, consisting of sharp stone chipped off of cobble cores. This period in Paleolithic tool making was called Oldowan. It is important to note that the cobble core is not a substance that will regularly chip, which means that the cobble core must have been struck by hominids [10]. Understanding that the cobble core was intentionally struck is very important when it comes to understanding the progression of hominid cognition. This action shows signs of complex thought processes where they could manipulate the core into ways that would be advantageous in the future. The incorporation of tools created from the Oldowan period followed by tools also made of bone resulted in a large shift in diet. Hominids started to eat more meat. The shift from scavenging for meat to successfully hunting for meat had a huge impact on human culture [11].

Eating meat has been seen as important throughout time, yet the addition of cooking it is relatively new. There is evidence of fire within hominid life that is roughly 400,000 years old.  As seen in Figure 2, evidence shows charred remains of bone or vegetation and unique flint chippings where the burnt flints appear to be reddened/shattered [12][13]. The main difference between hominid-controlled fires and wildfires is the temperature at which the fire is achieved.  This is done by observing the surrounding sediment and the extent of changes to the remains [14]. The introduction of fire into hominid life was revolutionary because their cognitive abilities had way surpassed any other animal on the planet [13]. Fire also meant that hominid culture was sure to quickly transition out of the primitive state much faster.

The addition of fire and firelight introduced a type of photoperiodism effect on hominids. Photoperiodicity is the natural response to the seasons and the changes in exposure to light [14]. The inclusion of firelight in hominid life seemed to convince hominids internal clocks, also known as circadian rhythms, that there were extended daylight hours. This created an extreme shift in hominid cycles, the most evident being the sleep-wake cycle. Many animals do not seem to rely on the photoreceptors in the eye that detect light, instead, they just have the 24-hour cycle built in: apes and humans are one of the exceptions. The sensitivity to photoreceptors in the human circadian clock meant that the light provided by the fire caused humans to stay up later. In turn, humans developed an extremely distinct culture resulting from this circadian clock change [14].

In addition to staying up late, humans started to become a lot more social with one another. The fire gave warmth and light, making a safer environment from predators and the cold. As a result, cognitive development began to skyrocket. Being in larger groups set up circumstances in which hominids would have to remember and establish relationships with multiple people [14]. Additionally, the fire would have been almost impossible for one person to tend to alone. For the fire to be properly tended to, hominids had to work together. This shows that cognitive development had reached a point where hominids were able to properly divide labor so that there would be optimal success. Also, this confirms that hominids were able to efficiently communicate with one another so that they could achieve a common goal. Moreover, the discovery of the Beeches Pit in East Anglia suggested that over 400,000 years ago, a fire could not be intentionally started. Therefore, keeping the fire alive was a very important task [13]. This further reveals that hominid cognition had developed to a  point at which they understood the consequences of the fire diminishing [14]. 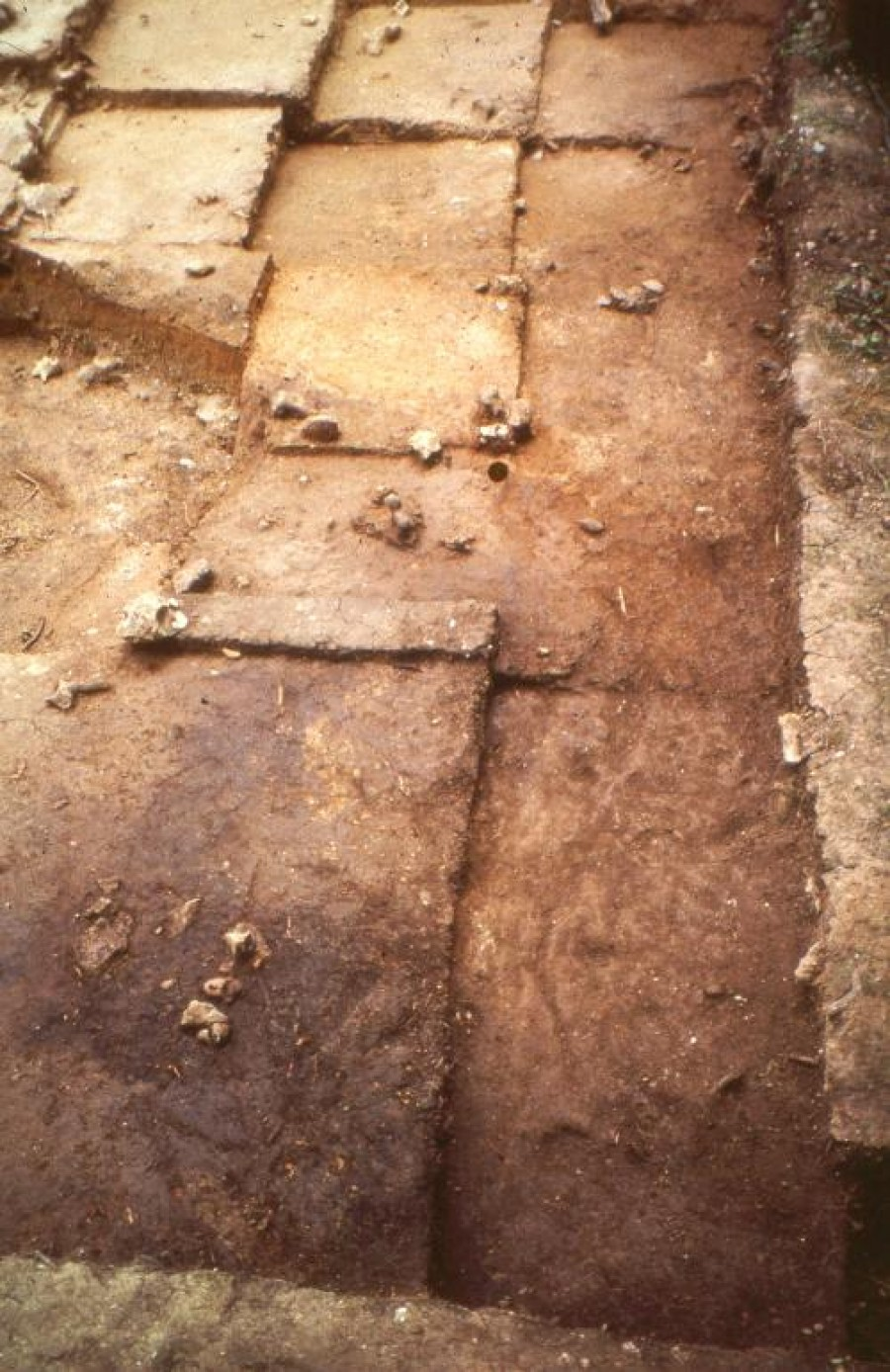 Figure 2. The site in Beeches Pit that shows evidence of fire [12].

Early hominid cognitive evolution displayed a rapid progression from basic survival instincts to intricate social structures and the ability for an advanced understanding of circumstances. Environmental challenges pushed hominid cognition into developing higher functioning brains that could effectively communicate. This development was crucial to Homo sapiens survival as it gave them an edge in hunting and gathering. Cultural influences resulted in the development of complex social systems that would ensure survival. As a result, hominids developed a higher understanding of their surrounding circumstances. Nevertheless, more research on the adaptation of the brain due to external influences is still needed. More research on the specifics that caused the formation of a globular skull is essential for our understanding, and further exploration of how it morphed hominid’s cognitive abilities is also very vital. More investigation is needed with regards to early hominid culture as this could enable a better grasp of hominid history and why they evolved in the way they did.

Hi! I am Torri Walker a senior at New Century Technology High School in Huntsville, Alabama. At New Century, I am the Co-President of the Neuroscience Club. I am also an intern at HudsonAlpha and I hope to pursue a career in paleontology/ancient genetics.