One of the main responsibilities of neuroscience in the past decades has been to elucidate the boundaries of science and distinguish it from pseudoscience. The ever-increasing knowledge in different branches of neuroscience and the advent of newer technologies have helped neuroscientists gain insight into the effects of substances on the brain. Traditional medicine and medicinal herbs have been used for millennia to treat ailments and maladies. Many of those treatments have lost their applicability, while others have found a spot for themselves in modern medicine. Hypericum Perforatum (St. John's Wort) is a medicinal herb that has long been used to treat depression and other diseases. By recent advances in science, its bioactive ingredients have been discovered and studied, enabling its role in treating depression and its potential side effects to be scrutinized. The aim of this article is to present a short neuro-scientific approach to depression and its treatment possibilities and to investigate the biochemical function of Hypericum Perforatum (St. John's Wort) in treating depression.

Hypericum Perforatum (see Figure 1) is a flowering shrub. This perennial herb produces small yellow flowers by the early and mid-summer. This plant has medical applications and has been used to treat depression, obsession, anxiety, and insomnia for the past two thousand years [1]. The botanical name, Hypericum, has a Greek origin and refers to the plant’s supposed ability to protect from demons and ward off evil spirits. Great ancient physicians, such as Hippocrates, Galen, and Pliny, have appreciated the plant's medicinal application including its psycho-modulatory effects [2]. This plant blossoms around St. John's birth date, on June 24th, and is named  in honor of John the Baptist. Medieval Christians used to hang the flower on stall doors or over religious icons during their feasts to protect themselves against diseases and ailments [3]. Nowadays, drug-producing companies, especially in Europe, produce standard formulations of this herb. It can be bought as a dietary supplement in grocery stores or ordered online through Amazon. Annual sales of it around the globe exceed billions of dollars. In Germany, it outsells antidepressants such as fluoxetine by as much as 20 to 1. Hypericum Perforatum contains many bioactive ingredients but the two most active ingredients are hypericin (a naphthodianthrone) and hyperforin (a lipophilic phloroglucinol). These two compounds have been studied thoroughly in vitro and in vivo contexts to evaluate their psycho-modulatory effects, particularly in treating depression [4]. In this review, the pharmacological effects of this herbal plant and its bioactive ingredients on neural tissues and its role in treating depression are studied [5]. 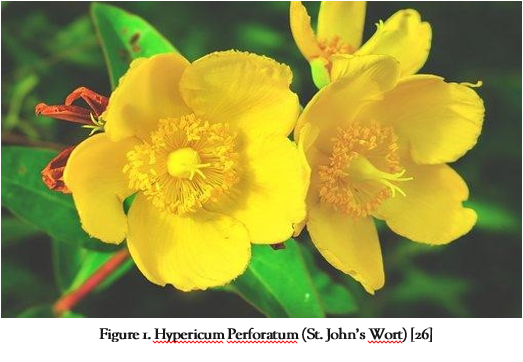 Depression is a mood disorder during which the mood becomes depressed and one loses interest and enjoyment in activities. It can be accompanied by physical impairment, cognitive disability, and impaired social performance. Its severity and duration may vary from person to person and accordingly it can fall into specific categories described in standard classification systems such as DSM-5 or ICD-10 [6,7]. Depression is pretty common  as more than 264 million people worldwide are affected [8]. Some great historical figures struggled with depression during their lives such as Abraham Lincoln, Sigmund Freud, Franz Kafka, and Virginia Woolf.

According to WHO, depression is the "leading cause of disability worldwide" and interferes with daily activities, sleep, and thinking [8]. Depressed people may overeat or lose appetite. They may have trouble concentrating or making decisions; they may feel worthless or guilty, experience pain, experience suicidal ideation, or hurt themselves. Currently, it is known that mood disorders such as depression are cerebral dysfunctions and are the result of molecular biological abnormalities in the brain [6]. 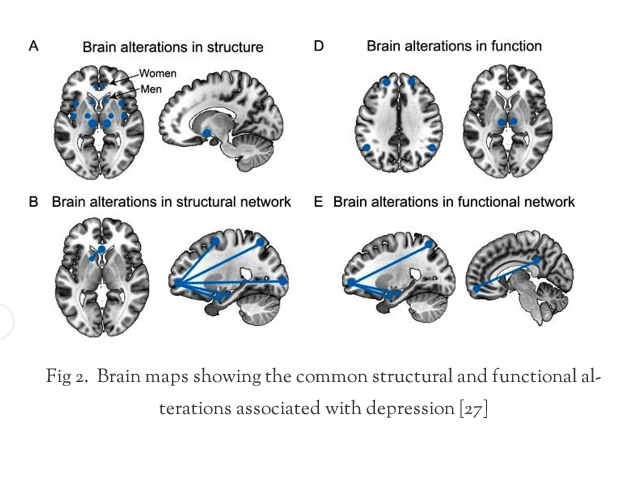 Brain scanning devices and neuroimaging methods provide useful information about brain activity in mood disorders. Magnetic Resonance Imaging (MRI) sequences have been used to study brain changes in depression. Diffusion tensor imaging (DTI), high-resolution structural imaging (3D-T1), and functional MRI (fMRI) are among MRI sequences that have been specifically used in this regard. DTI scrutinizes the white matter microstructure, 3D-T1 studies brain morphology and the thickness of gray matter, and fMRI shows brain activity in different parts of the brain. MRI studies in depression have shown structural brain changes and abnormal brain activity in several regions, including the frontal lobe, thalamus, striatum, and parietal lobe [9]. Neuroscientists have also discovered a decrease in myelinated axons, a smaller amygdala, a smaller hippocampus and large fluid-filled lateral ventricles in patients with depression [10]. Brain regions are interconnected and form complex networks. Impairment in these connections, especially circuits connecting cortical to the subcortical area, can be the leading cause of diseases such as depression (Fig.2) [11].

Positron Emission Tomography, also known as PET scan, is another imaging modality used for evaluating brain function and activity in mood disorders. It is a functional imaging technique that uses radioactive tracers to study metabolic activities and physiologic processes such as blood flow in the brain. PET studies in patients with all types of depression have shown decreased metabolic activities in the frontal lobe. The severity of decreased metabolism in the brain correlates with the severity of depression and normalizes when the mood returns to normal with treatment. Abnormal metabolic activity is also discovered in some other brain areas, including the temporal lobes, the cingulate gyrus, and the amygdala [12].

Neurotransmitters are a series of chemicals in the body that transmit messages between nerve cells or from nerve cells to other cells such as muscle cells or gland cells. Monoamines are a group of neurotransmitters in the brain involved in the regulation of mood, emotion, and memory. Dopamine, norepinephrine, and serotonin (5-HT) are the three main monoamine neuromodulators in the body. Neuroscientists have discovered a strong correlation between mood and the levels of these monoamines in the brain. For example, norepinephrine that boosts mood and increases arousal is decreased significantly in depression. Serotonin (5-HT), another monoamine neurotransmitter, is also in short supply in depressed patients [13].

By knowing the biochemistry behind mood disorders in the brain, neuroscientists search for ways to correct disturbances in neurotransmitter levels and compensate for monoamine deficiencies. Aerobic exercises such as walking, running, biking, and swimming can boost mood by increasing serotonin levels in the cerebral cortex and brainstem [14]. Neuroscientists have also discovered the role of sunlight, massage, and even remembering happy memories in increasing brain serotonin levels [15,16,17]. Antidepressant drugs such as fluoxetine (Prozac) also elevate arousal and mood by increasing the availability of serotonin and norepinephrine in nerve synapses.

Any compound that increases the level of serotonin and norepinephrine in interneuron synapses is potentially capable of elevating mood and treating depression. Monoamine oxidases (MAO) A and B are outer mitochondrial membrane proteins. These proteins catalyze the oxidation and degradation of amines, including monoamine neurotransmitters, serotonin, norepinephrine, and dopamine. Drugs that inhibit the activity of monoamine oxidase can increase the amount of monoamine neuromodulators in the synaptic cleft and can clinically be used for the treatment of depression. Isocarboxazid (Marplan), phenelzine (Nardil), and selegiline (Emsam) are some examples of the MAO inhibitor (MAOI) drugs prescribed for the treatment of atypical depression and treatment-resistant depression [18].

Hypericin is one of the main ingredients of St. John's Wort. It was once thought to be the main antidepressant constituent of this plant. It works by inhibiting enzymes MAO A and MAO B. Therefore, monoamine levels such as serotonin and norepinephrine increase in the synaptic cleft and help treat depression [19]. Later studies showed that hypericin’s ability to inhibit MAO was lower than what was first presumed and the level of hypericin necessary to obtain significant MAO inhibition was far greater than that likely to be found in human brain tissue at normal doses [20].

After being released by a presynaptic nerve cell, monoamine neuromodulators attach to and activate receptors at postsynaptic dendrites. Some of the serotonin released in the synapses is reuptaken and deactivated by presynaptic axons. Selective Serotonin Reuptake Inhibitors (SSRI) are the main synthetic antidepressants that increase serotonin at the synaptic level by inhibiting its reuptake by presynaptic nerve cells [21]. Fluoxetine (Prozac), fluvoxamine, paroxetine, sertraline, and citalopram are the five major SSRIs. They have a very low affinity for neurotransmitter receptors (post-synaptic) and a high affinity for 5-HT reuptake transporters (pre-synaptic) [22].

Hyperforin, the other main ingredient of St. John's Wort, inhibits serotonin reuptake, like SSRIs. Unlike synthetic antidepressants that block 5-HT receptors, it inhibits serotonin reuptake by an increase in sodium uptake by presynaptic neurons and elevating intracellular concentrations of sodium (Na+) and calcium (Ca2+). The loss of the Na+ and Ca2+ gradient between the neuron and the synaptic cleft decreases reuptake of the monoamine neurotransmitter and increases their level in the synaptic space [23]. This different mechanism of action may lead to a new class of antidepressants in future. Hyperforin also has shown to increase 5-HT receptors in rat brains, indicating a possible long-term therapeutic benefit [24].

The human body is a complex structure with many systems working together to maintain one's health. Brain and the nervous system function in collaboration with other body parts, affecting and being affected by other organs. Synthetic pharmaceuticals and medicinal herbs used to treat mood disorders such as depression are ingested by the body and can affect not only the brain and nervous system but the whole body.

St. John's Wort is found to induce Cytochrome p450. Cytochrome p450 is a large and diverse family of enzymes that metabolize and degrade drugs and toxic compounds. By inducing Cytochrome p450, St. John's Wort can weaken the effect of medications that are metabolized and degraded by Cytochrome p450 such as birth control pills, digoxin (a heart medication), oxycodone (a pain medicine), some HIV drugs (such as indinavir), some cancer medications, and Warfarin (an anticoagulant or blood thinner). By decreasing the therapeutic level of these medications, some clinically adverse outcomes may happen. In addition, concomitant use of St. John’s wort with other antidepressants that increase serotonin level in the body can result in serotonin syndrome, which is a potentially life-threatening condition with symptoms including agitation, diarrhea, fast heartbeat, high blood pressure, hallucinations, and increased body temperature due to elevated serotonin level in the body [25]. 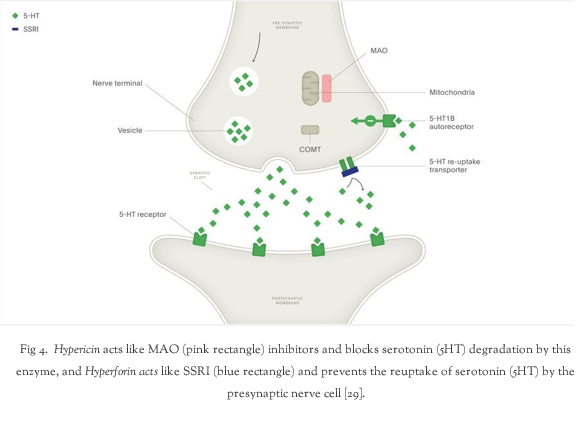 Hypericum Perforatum or St. John's Wort is a medicinal herb that has long been used for treating depression and some other psychological disorders. The serotonin level in the synaptic cleft is increased by the effect of its two main bioactive ingredients:

Hyperforin is now considered the main anti-depression constituent of St. John's Wort; hypericin's activity is shown to be less than what was once presumed. St. John's Wort induces a cytochrome p450 enzyme that is responsible for the degradation of many prescription drugs and can weaken their efficacy. Concomitant use of St. John's Wort with other antidepressants can lead to serotonin syndrome that is potentially a life-threatening condition. Today, St. John's wort is available by prescription in Europe, especially in Germany. In the US, the Food and Drug Administration (FDA) has not approved the substance for depression or any other medical condition.

I'm Sadra. I'm currently a senior in high school. From a very young age, I have been interested to pursue a career in the medical field. In the past couple of years, I have been studying the complexity of the brain and became interested in neuroscience as well.