The Split Mind: An Overview of Dissociative Identity Disorder

At the sound of the word dissociating, or dissociation, many immediately think of the definition of removing oneself from a situation or detaching emotionally. While this may be true, there is certainly more to dissociation, and thus, the disorder associated with it. Although often classified as a personality disorder, Dissociative Identity Disorder (DID) is actually a mental disorder characterized by the perpetuation of two or more personalities. As derived from its name, DID causes those diagnosed to resort to an extreme dissociative state simply to survive in their current trauma-inducing environment or to cope with their previous abuse.

Dissociative Identity Disorder (DID) is a psychological disorder that is often questioned for its veracity and likelihood within society. The disorder is commonly defined as two or more alternate states of consciousness or alternate personalities; it generally stems from early childhood trauma.  The development of DID in childhood is commonly due to abuse, neglect, and boundary violations, and it can be linked to antecedent chronic abusive experiences [2]. Environments that are heavily concentrated with  boundary violations, narcissism, and dramatic posturing contribute to the likelihood of the development of DID. This trauma and constant familial role changes can push children and young adolescents to adopt a dissociative adaptation style in an attempt to create a stable identity for themselves. In such cases of familial trauma, the perpetrator can be the one that the victim emotionally relies on, causing the victim to resort to such dissociative measures in order to maintain their relationships. Children facing abuse often receive contrasting actions and relations from their abuser, ranging from fear and pain to love and affection. In turn, those children create two personalities, one eager to please the abuser during less hostile moments and another personality that is antagonistic during abusive episodes. These children then need to subconsciously choose which personality to be in order to adapt to this dangerous environment [3]. These coping dissociative measures may also include dissociative amnesia, in which the patient momentarily forgets events that occurred when embodying an alternate personality. Additionally, there are biological predispositions that increase the possibility of a  patient’s ability to dissociate. For example, certain DID patients have decreased cortical thickness in the insula, anterior cingulate, and parietal regions compared to individuals without the disorder [1].  Thus, the wide variety of symptoms that patients experience stems from both biological predispositions and traumatic events. 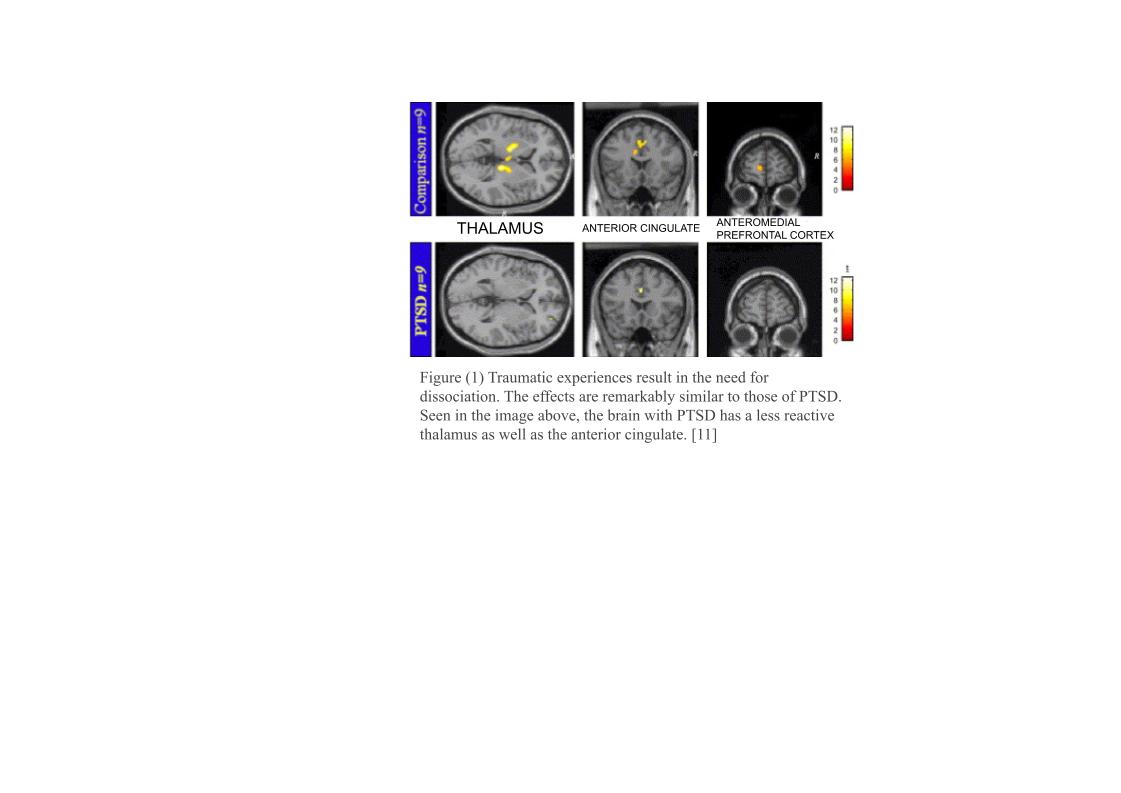 How DID Affects the Body and Mind

A variety  of different symptoms can remain dormant until a stressful event triggers DID. The four basic symptoms of DID include the existence of dissociative episodes where there is a division within the identity of an individual, confusion of multiple identities, amnesia when switching alters, and experiences of depersonalization in which one will lose their sense of self [2]. Pierre Janet, a renowned French psychologist, defined dissociation as the “separation of an idea or thought process from the mainstream of consciousness” [4]. Patients can also experience cognitive functioning changes, personality changes, loss of emotional control, and dysfunctional consciousness. Neuroscientifically, individuals who underwent child abuse tend to have a less developed orbitofrontal cortex; this decrease in volume coincides with the lack of distinct mental states [2]. Other symptoms of DID include hallucinations, unique voices with distinct characteristics, referring to oneself in  the third person or as a completely different individual, depression, a larger capacity for deception, and/or imaginary friends [4]. Although these symptoms can be extremely debilitating, there are treatments to alleviate the intensity of the effects. 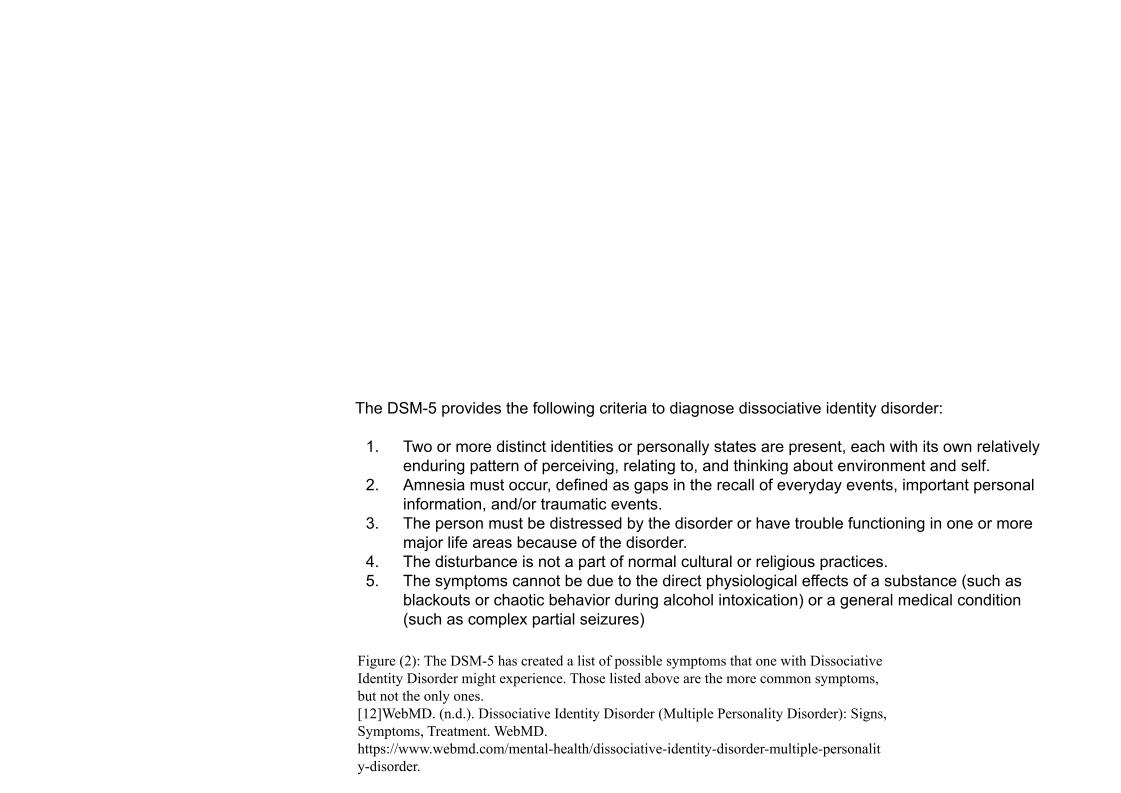 Possible Approaches to Treat DID

The approach to treating DID has its foundation in therapies such as cognitive and schema forms, where trust is an omnipresent theme. Although relieving symptoms is a prioritized objective while treating DID, the most effective way to achieve this goal comes from the fusion of a patient’s alternate personalities. There is a rudimentary list of steps to address this  disorder, which includes trust, communication between the therapist and the patient’s personalities, interpersonality relations, resolution and integration, and new coping skills [3]. While there can be a range of different approaches to treating DID , such basic tactics are almost always used in each strategy, in hope of fusing the alters.

Treatment usually involves cognitive behavioral therapy (CBT), a procedure where both the thought process and resulting behavior of a patient are focused on forming healthier practices. In a typical case, therapists see patients weekly or biweekly for numerous years in order to maintain a consistent pattern with their clients [5]. In such therapy, therapists have to maintain a balance of not being too authoritarian or too lenient and should refrain from personalizing accusations made by each alter. There are three stages involved in DID symptom management. The first stage emphasizes emotional regulation, containment of intrusive material, and impulse control. The second stage prioritizes exposure to balance within interventions, and the third stage works on building healthier life practices within a patient’s life [1].

Another type of therapy besides CBT is schema therapy, an experimental therapy, which incorporates CBT, psychoanalysis, attachment theory, and emotion-focused therapy. Similar to CBT, schema therapy aims to increase the consciousness, communication, and integrated functioning between each alter, leading to their unification [6]. The customary duration of schema therapy is approximately three years, in which the three following stages take place. The first stage includes managing  safety and symptom stabilization. Within the second stage, traumatic memories are confronted and processed by the patient. In the third stage, the therapist and patient collaborate in order to arrive at identity integration and rehabilitation. Currently, there are no pharmaceutical medications that directly correlate with reducing the intensity  of DID symptoms. Additionally, the high cost of therapy programs  can weaken the likelihood of a patient receiving treatment [1].

Comparative Analysis of BPD and DID

DID shares very similar symptoms with Borderline Personality Disorder (BPD). In particular, DID is a secondary byproduct of BPD, as most patients that were diagnosed with DID also met the criteria for BPD [1]. Thus, BPD and DID share a number of indistinguishable symptoms, such as self-destructive behaviors, identity problems, splitting as a defense mechanism, and troubled interpersonal relationships. However, a key divergence between the two disorders is that BPD uses polarization as a form of splitting, whereas DID uses ego splitting, also called identity division [7]. Furthermore, though both conditions begin with trauma, BPD patients have more developmental deficiencies. BPD patients also tend to grow up in homes where aggression is more present as opposed to patients with DID, who experienced more covert domestic violence [7]. This difficulty in individualizing between disorders is  creating  controversy within the medical field altogether  Consequently, the overlaps in differentiating these disorders can also lead to uncertainty even within the disorder, as portrayed through the unreliable myths constantly depicted in the media.

DID in the Media and Its Repercussions

The lack of accuracy  in the representation of DID in movies and television leads to misconceptions regarding the disorder. DID is villainized more often than other disorders in the media. Thus, this falsification paints people with DID in a negative light, stigmatizing the desire for proper medical diagnosis and treatment. For example, in the popular films Glass and Split, the main characters were depicted as overly angry and dangerous solely because of the disorder, suggesting to the audience that DID was directly associated with extreme violence [8]. Additionally, this negative depiction impairs DID patients’ lives because the exaggeration of the disorder causes disbelief in its audiences, taking a toll on patients’ acceptance and recovery [1]. This false representation  in the media catalyzes the formation of common myths embedded within society.

Although some may state that DID patients are excessively belligerent, studies have shown that DID patients are not any more likely to be violent compared to the general population [9]. Another false belief  pertains to the switching of alters. Many believe that the shift of alters is obvious and noticeable; however, in reality, the transition can be seamless and incredibly difficult to notice as an onlooker [9]. Furthermore, a standard misunderstanding surrounding DID is  that DID patients’ only symptom is having different alters. In reality, the different identities are simply a byproduct of certain  trauma within a patient's life. . Trauma has many  debilitating effects, including flashbacks, dissociative amnesia, emotional dysregulation, and somatic symptoms [10]. Misrepresenting DID can create a rippling effect, harming not only the patients that endure the disorder but also the understanding of the condition within the general public.

Dissociative Identity Disorder is a complex condition  that still has corners for scientists to explore. Due to its obscurity, this disorder is often controversial to diagnose; therefore, it does not receive the attention it so desperately needs. The additional difficulty of differentiating its symptoms from other disorders calls for a more eclectic approach to treatment, giving patients their own distinctive treatment styles. Unfortunately, false representations and exaggerations are often found in the media surrounding this condition, distorting the reality of the disorder in the eyes of the public. Further research into this controversial disorder could potentially aid those experiencing its symptoms with a better understanding of their condition and brush away the animosity towards DID patients.