The Orbitofrontal Cortex: A Brief Overview 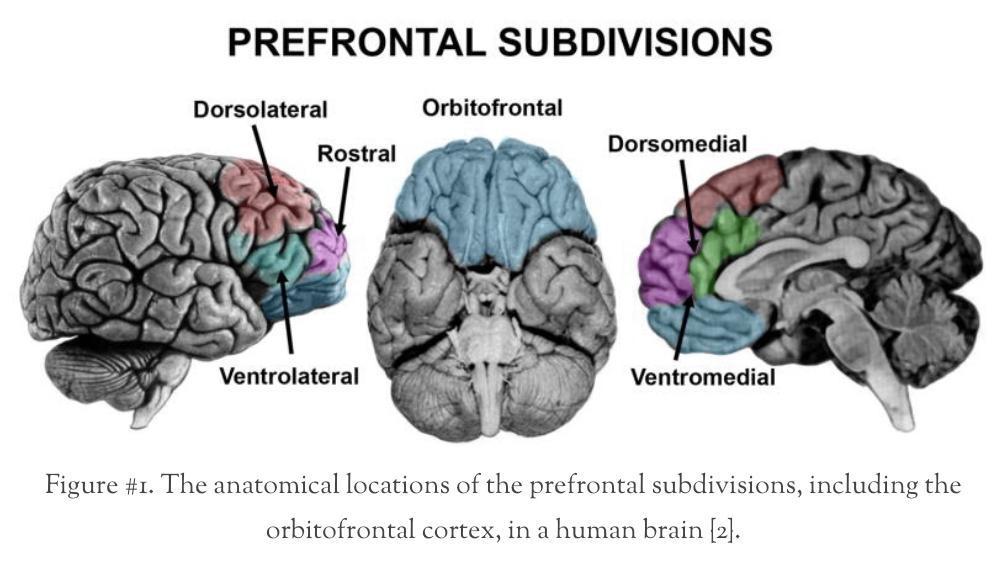 Figure 1. The neuroanatomical locations of the prefrontal subdivisions, including the orbitofrontal cortex, are depicted above [2].

In the era where frontal lobotomies were carried out, there were also a small number of orbital leukotomies, a neurosurgical operation in which the connections of nerve tracts to and from the frontal lobe of the brain are severed; often resulting in cognitive and personality changes, carried out. Among the patients who received orbital leukotomies, there was an increase in extroversion, restlessness, and euphoria, as well as a worsening in aggressive or impulsive tendencies. These effects were also consistent in individuals who had experienced OFC damage. From observations, a theory that suggests that the OFC is critical for exerting ‘inhibitory control’ over behavior became prominent [1].

The OFC has been linked to play a role in several neuropsychological disorders, such as addiction, depression, and obsessive-compulsive disorder (OCD), as well as playing a role in economic choice [5]. There are two ideas about the role of the OFC, one that it plays a simple and direct role, the other that it is more nuanced. The first theory suggests that the OFC  is the main site for evaluation as well as option comparison in economic choices. This idea that the OFC only plays a simple role suggests the OFC focuses on the conceptually basic elements of evaluation, comparison and selection. The latter idea suggests that the OFC plays a complex role in mapping possible outcomes and reevaluating rapidly changing environments. In this theory there is emphasis into the difference between the well-established and well-learned aspects of choices and changing aspects, a process which would arguably require more mental resources [6].

The OFC is also an important part of emotional regulation. Damage to the OFC in humans can come with changes in social behavior, which, at the extreme, present similarly to sociopathy. In animals, increased aggression and reduced fear-related behavior are associated with lesions of the OFC [1]. The OFC also modulates parenting stress and is associated with maternal motivation. In a scientific study, it was found that mothers who have higher activation in the OFC showed less parenting stress related to their parenting competence [7].

In the functional neuroanatomy of OCD, the OCF is a critical part. In OCD specifically, there has been consistent hyperactivity within the OFC in studies and it has been interpreted that this provides evidence that abnormalities in cortico-basal ganglia-thalamo-cortical loops involving the OFC are related to OCD [8].

The OFC is also heavily involved in addiction behaviors. In regards to alcohol addiction, research has found that heavy alcohol usage activates a protein complex, mTORC1,  in the OFC which decreases alcohol seeking in rats. However, inhibition of a protein that in humans is encoded by the GRIN2B gene, GluN2B,  in the OFC reduces the alcohol-dependent mTORC1 activation. There is then evidence that the GluN2B/mTORC1 axis in the OFC causes an individual to seek alcohol. This, therefore, suggests that the OFC has involvement with alcohol addiction [9]. Another addiction behavior that the OFC is involved in is drug addiction. A circuit that is involved with drug addiction is the OFC-striatum-globus pallidus-thalamus-OFC loop, as it is involved in sensation, mediating reinforcement, motivation, reward, memory, and inhibitory control [10].

There have also been strong indications that the OFC is involved in encoding or storing specific stimulus-reward associations and there have been results in studies that suggest the OFC is critical for goal-directed behavior. From research, it appears that the OFC plays a central role in learning and is critical when subjects must continuously update the desired outcomes each stimulus will lead to. Neurons in the OFC monitor the rewards that are available to the individual, as well as the punishments. The neurons in the OFC also monitor the quality, quantity, and other associated features of the rewards and punishments available, allowing the individual to determine the value. It has been found that rats with lesions of the OFC are unable to learn, whilst in humans and monkeys, learning impairment following OFC damage is most evident when the relationship between stimuli and rewards is a probabilistic one [1].

The OFC contains connections with limbic areas of the brain and this allows associative information regarding outcomes to be able to access the representational memory [11]. In imaging studies, a change in blood flow occurs in the OFC during anticipation of outcomes and also when the value of the outcome is modified [12]. The important role in which the OFC has in signaling outcome expectations can also be reflected in the emotional reactions to the outcome and is evident in reinforcer devaluation tasks. An example of the latter is from an experiment involving rats, light cues, food, and illness. Rats were trained to associate a light cue with food and then the food is devalued by pairing it with illness. In an extinction session, the rats who have had the food devalued responded less to the light cue when compared with non-devalued controls. Rats who had an OFC lesion did not change their behavior after the devaluation of the food and showed no effect of devaluation to conditioned responding [11].

The evidence from scientific studies suggests that the OFC is a very important factor in new learning. For signaling the value of expected outcome, the OFC is critical and the rapid recognition of unexpected outcomes permitted by these outcome expectancies is what allows new learning [13].

Past research on the OFC has vastly improved the knowledge on both its function and importance. However, there is still a vast amount of research taking place regarding the functions of the OFC and this research has evolved significantly from the past. As the OFC plays such a crucial role in both emotion and cognition, which can be seen when individuals suffer damage to the OFC, there is still a lot left  to learn about the OFC [1].

I’m a Highschool Student in the UK with a love for neuroscience. In the future I’m hoping to attend university to study medicine.