Throughout the history of neuroscience, scientists have perceived the brain to be a stagnant organ throughout the course of one’s life. However, novel research has demonstrated that the central nervous system is actually very dynamic and possesses the ability to rewire itself throughout one's life—a process termed neuroplasticity (or neural plasticity). This process occurs as a result of a wide variety of neurobiological mechanisms including the creation of new neurons, changes in synapses, and the formation of new neural pathways [1].

Neuroplasticity most often occurs in responses to new stimuli, which can induce one of the aforementioned mechanisms. When an organism encounters a new experience or learns a new behavior, its nervous system must change in some manner to “encode” the experience and enable behavioral change [2]. This is why the process is sometimes termed experience-dependent neuroplasticity, as changes in the nervous system are most often induced by novel experiences or stimuli.

One mechanism that is particularly impacted by such experiences is termed synaptic plasticity. This type of plasticity specifically refers to the various changes that synapses may undergo as a result of environmental change. For example, new synapses may be created to form additional neural pathways that encode new experiences [3]. In other instances, axons or dendritic branches may undergo structural changes that can either increase or diminish synaptic strength [4].

Lastly, recent studies in animal models suggest that synaptic plasticity is highly driven by changes in protrusions along dendrites, categorized as either spines or filopodia. These studies demonstrate that the formation and elimination of such protrusions are part of the structural basis that allows organisms to learn new behaviors. For instance, several studies in the mouse motor cortex have illustrated that when mice learn a new task (i.e. reaching for an object), new spines and synaptic connections are formed. Some pre-existing spines are also eliminated at the same time, once again suggesting that some reorganization in the nervous system takes place to accommodate for new experiences. The number of spines that are formed and not eliminated is also associated with the degree of learning acquisition and maintenance of the skill learned [5]. As a result, such studies demonstrate that new experiences not only induce neurobiological change, but that these changes also have actual behavioral effects on an organism. 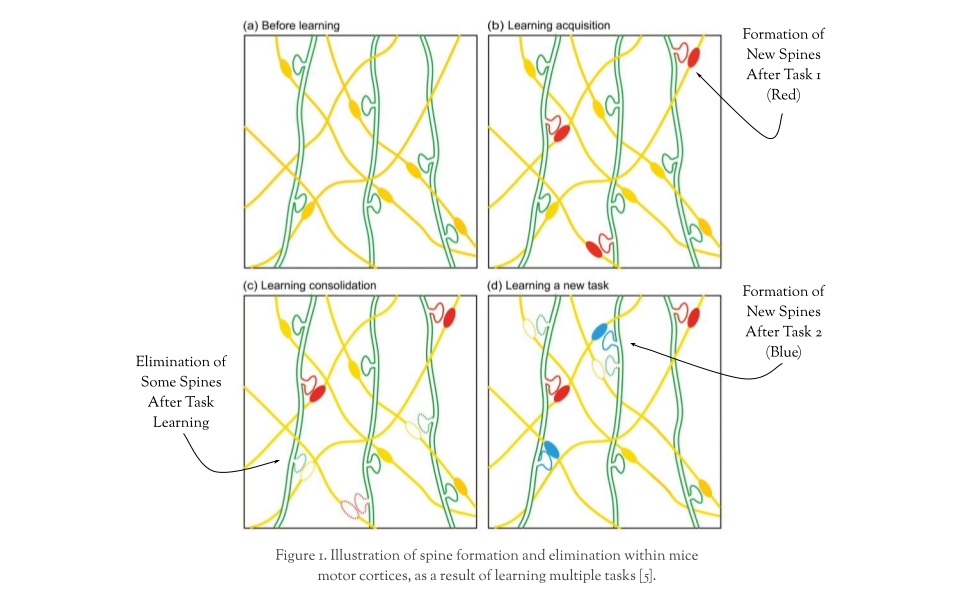 The nervous system’s unique ability to change and adapt is of great importance to rehabilitative research [4]. Currently, few therapies are known to be effective in treating neurological conditions, especially in restoring any cognitive or behavioral functions that may be impaired by them. For instance, the most common result of strokes is impairments in motor function in the brain hemisphere opposite to the hemisphere impacted by the stroke [3]. Stroke patients are often left either unable to perform certain tasks, or may only be able to perform them with much difficulty, and not many therapies are available to rehabilitate stroke survivors. Thus, much optimism can be found in the prospect of exploiting neuroplasticity to restore functionality in the nervous system [2].

Evidence from motor system research has demonstrated that following brain damage, connectivity maps and behavioral skills can be somewhat restored through intense practice and rehabilitation. More specifically, therapies that particularly depend on skill training have the greatest ability to induce and optimize plastic changes within the motor cortex [6]. These changes allow the nervous system to reorganize itself using the undamaged tissue that remains after nervous system injuries, and in effect, this may allow the nervous system to compensate for loss following an injury [2][3].

For instance, robot-assisted bilateral arm therapy (RBAT) is a therapy that relies on neuroplastic changes to restore motor function. RBAT involves the use of a robotic device to aid an individual in various motor tasks, as well as to provide instant visual feedback during therapy sessions. In one study, stroke patients were subjected to RBAT for 90 minutes a day, 5 days a week, for 4 weeks. Participants were tasked with performing movements involving their wrists and forearms, using both their nonparetic and paretic limbs, and sometimes with occasional support from the robotic device. RBAT was also followed by several minutes of practice with various functional tasks such as picking up coins. Resting-state functional magnetic resonance imaging (RS-fMRI) was then used to observe internal brain connectivity and interactions within the participants during wakeful rest, conducted at the beginning and end of the study. The results of this study demonstrated that despite damage in one hemisphere due to stroke, the participants had greater functional connectivity between the motor-related areas of both hemispheres. In addition, this increase in connectivity was also correlated with improvements in performance in motor tasks after RBAT [7]. Thus, this study evidently supports the notion that neuroplasticity allows the brain to reorganize its neural pathways, compensating for loss of motor function following brain injuries. RBAT and many other similar therapies are able to induce this natural process through functional task experiences, which in turn translates to restoration of motor skills. 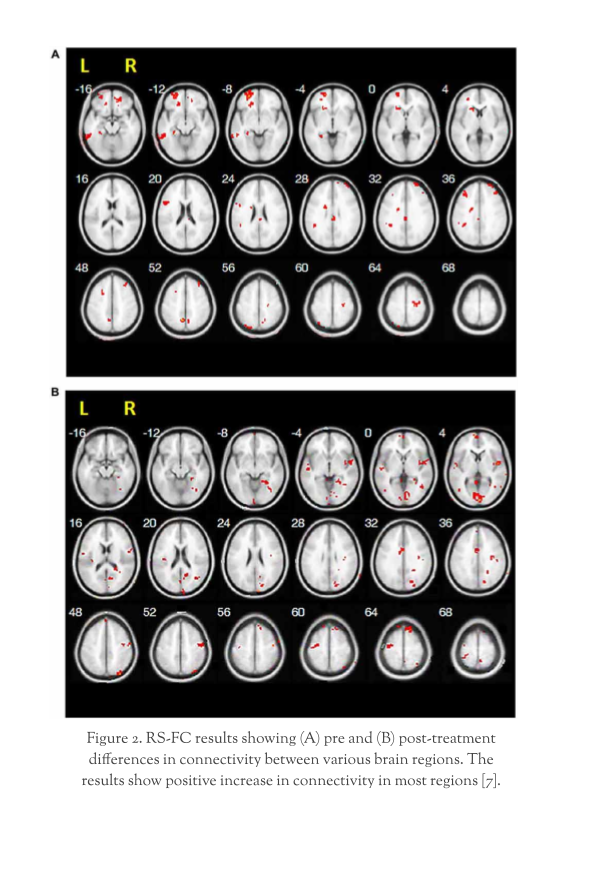 Neuroplasticity can clearly be exploited to develop therapies for nervous system injuries. However, recent studies in animal models have identified several key principles – outlined below – of neuroplasticity that must be considered as therapeutic research progresses. Adherence to these principles ensures that therapies are not only effective, but also prevents them from potentially becoming maladaptive.

If the neural pathways involved in certain tasks are not actively and continuously used, they will begin to degrade [8]. Studies dating back to the 1960s, for example, found that depriving kittens of light causes a decrease in the number of neurons and synapses in their visual cortices. A similar study saw that after the removal of one digit from owl monkeys, the neural regions correlating to the digit now responded to other parts of the hand, suggesting some degree of reorganization. Conversely, training experiences have also been shown to induce and optimize plasticity within corresponding brain regions [2]. Training activities, for instance, have been shown to enhance the structure and function of the neural mechanisms for the behaviors involved.  However, studies indicating this have only involved simple movements such as reaching tasks in rats, so further research is needed to support this principle in the context of more complex movements [8].

Principle 2: Tasks must be sufficiently repeated during training.

Training experiences may only induce plastic changes after prolonged and repetitive practice [8]. Certain tasks must be repeated for a sufficient amount of time to induce effective reorganization, and as a result improve the functionality of certain skills. Arguably, this principle is perhaps the most important for neuroplasticity, as the specific number of repetitions required to create effective change is highly debated. Several studies in animal models estimate that anywhere from 1000 to 10000 repetitions of a task may be needed to fulfill such a goal [6].

Training experiences must also be sufficiently intense to induce plastic changes [8]. One recent study found that participants who engaged in moderate to high-intensity exercise experienced less of a decline in brain processing speed and long-term memory across 5 years, compared with participants who engaged only in low-intensity activities [9]. In addition, other studies have also found that low-intensity stimulation can actually be maladaptive, weakening synapse strength over time. Moreover, training may be maladaptive if it is too intense for an individual, so future studies must be cognizant of the appropriate intensity level per participant [6].

Training that induces plasticity in one set of neural circuits may also lead to changes in another [2]. Moreover, training in one skill or behavior may lead to improvements in unrelated ones [6]. For instance, one study involved participants aged 60-89 engaging with a challenging computer program. As a result, the study observed that individuals had improved memory for tasks that they had no previous training with, suggesting plasticity in brain regions unrelated to the initial task [9]. Conversely, some studies have also shown that plastic changes in one neural circuit could negatively impair the functioning of another. This has been observed in stroke patients, for instance, whose reliance on their unaffected limb interfered with improvements made in the affected one [8]. As a result of this principle, future research around rehabilitative therapies clearly must consider the wider implications that training may have on patients.

Discoveries made around neuroplasticity continue to illuminate the dynamic capabilities of the nervous system, allowing it to adapt to change. Numerous therapies are now being researched and developed to harp on the various mechanisms involved in neuroplasticity. From strengthening synapses to reorganizing neural pathways, these therapies are able to induce changes that may restore functionality in impaired nervous systems [10]. As research progresses, certain principles relating to neuroplasticity must also be considered to ensure that induced changes are positive, rather than maladaptive [9]. Finally, despite the potential for negative implications, exploiting neuroplasticity might very well be one of the greatest avenues towards effective rehabilitative therapies in the future.