In early-onset or familial AD, a person shows symptoms before the age of 65. One of the genes involved in AD is the PSEN-1 gene, which is on chromosome 14 [5].  Mutation in this gene is the most common cause of early-onset AD. 80% of people with early-onset AD show a mutation in this gene. These people develop AD symptoms around the age of 30 or 40 [5].  Another gene is PSEN-2. This gene is carried on chromosome 1, and if a mutation occurs, the person shows symptoms later than the mutation in the PSEN-1 [5].  Mutation in these genes is associated with the protein presenilin. The protein presenilin is a subunit of the enzyme gamma-secretase, which has been implicated in the cleavage of the apolipoprotein precursor. A mutation in the APP gene, which is carried on chromosome 21, can cause AD [5]. Because patients with Down syndrome have 3 copies of chromosome 21, they will develop this disease in the future if there is a mutation in the APP gene. Because of this, people with Down syndrome are also more likely to develop AD. If one parent has a mutation in any of the genes mentioned, the probability of the child being infected is 50% [5].  If the child is not infected, it will no longer be carried and will not pass on to the next generation [5]. However, a small number of families do not show any mutations in these genes. These people probably have mutations in genes whose effects on AD are unknown. 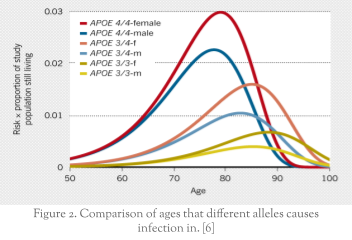 Tables 1,2,3: The relation between genotype and the average age of affected sporadic case subjects [7]

In cases where there is no genetic background in the family, the average age of developing AD in females and males is approximately equal (71). Table 3 clearly shows that in all cases, genotype e4/e4 causes infection at a younger age than the other two genotypes. However, the age of developing AD is almost equal in genotypes e3/e3 and e3/e4. Although Table 3 confirms that allele e4 is more dangerous than other alleles, this is not right about tables 1 and 2. For instance, in table 1, the average age of developing AD in people with genotype e4/e4 is higher than the genotype e3/e3. The reason for this discrepancy is most likely due to these cases being sporadic and that no one else in their family has the disease or gender may play a relatively important role in the average age of AD. As women with genotype e4/e4 are more prone to infection than men with the same genotype.

Tables 4,5,6:The relation between genotype and the average age of affected members of AD families [7]

Table 6 clearly shows that people with e4/e4 genotype have a lower incidence. This confirms that in people with familial history, allele e4 reduces the age of onset. On the other hand, it can be concluded that cases with genotype e3/e3 and familial history in males have lower age of incidence compared to females. This principle can be easily understood by comparing Tables 4 and 5. It can also be inferred that in cases with familial history the Disease occurs earlier in men than women, especially men with genotype e3/e3.

Alzheimer's is one of the Diseases for which the key to understanding and comprehending the processes involved in its development has not yet been fully understood. Therefore, it is difficult to discover a cure for this disease, especially considering the genetic deficits involved. Among genes causing the disease, ApoE (e4) has a significant role and strengthens the possibility of being infected [5].

Sana is a student, studying in Farzanehgan high school, and is interested in neuroscience and genetics. Thus, she likes venturing into infinite and astounding world of neurogenetic diseases. She hopes for a world full of happiness and health, both mentally and physically.