Consciousness: A Philosophical and Scientific Mystery

All humans have a consciousness – a state of awareness when awake that allows us to acknowledge our existence. The debate over consciousness has existed for many years, even centuries, between philosophers and scientists. Qualia, also known as the origin of our consciousness, has been a mystery “from the earliest days of antiquity right up to the present.” Consciousness lets us experience the world interactively, although some believe that our feelings are delusions. New revelations are giving neuroscientists and philosophers a lot to ponder about our consciousness [1].

Consciousness is hard to define. It is the sum of our external and internal experiences but something which, in and of itself, maybe an illusion [1]. Instead of responding automatically to their surroundings, humans are conscious of their actions and decisions. For example, hunger makes people reflexively and unconsciously salivate, but those same people can also choose when or what to eat [2]. Around 400 years ago, Descartes said “cogito, ergo sum,” meaning, “I think, therefore I am,” sparking one of the most long-lasting controversies on a topic that is still vexing scientists and philosophers today. His thesis on mind-body distinction has especially been a subject of inquiry and discussion for centuries. It essentially states that “the nature of the mind (that is, a thinking, non-extended thing) is completely different from that of the body (that is, an extended, non-thinking thing), and therefore it is possible for one to exist without the other” [3]. Even before Descartes, philosophers like Aristotle and Plato had theories about the origin of consciousness. While these famous people had distinctive views about the soul and its existence, some arguments that they made were disproven. For example, in his advocacy for the existence of a soul, Descartes argued that the brain and soul must be different because “the brain, which is a part of the body, is mortal and divisible—meaning it has different parts—and the soul is eternal and indivisible—meaning it is an inseparable whole.” Roger Sperry, a 1981 Nobel laureate, found that patients with a severed corpus callosum, the area connecting the left and right hemispheres of the brain, could train each hemisphere to complete a task. Thus, a “double consciousness” formed, and Descartes was proven incorrect. Psychologists and neurophilosophers alike have come to the same conclusion that there is no “soul”; our consciousness stems only from our brains [4]. Despite this, consciousness is still a fascinating issue because of the question of what physical systems control it.

Hypothesizing: How It Works

Neuroscientists have turned away from philosophy to seek out the “physical footprints” of consciousness in our brains. Theories about how consciousness is formed in our brains are abundant. One theory about neuronal correlates of consciousness, or NCC, which are “the minimal neuronal mechanisms jointly sufficient for any specific conscious experience” and the subject of much research as the key to understanding consciousness. Specifically, the posterior cortex may be the “seat of consciousness” according to recent research. Causal evidence from studying the effect of “electrical stimulation of cortical tissue” on patients unable to use certain regions of the brain shows that stimulation of the “posterior hot zone” of the brain may trigger a variety of sensations. Studying patients has shown that the loss of a great portion of the frontal lobe tissue does not affect the conscious experience, but removing any portion of the posterior cortex can cause serious issues, such as the inability to recognize faces or “to see motion, color or space” [1].

On the other hand, multiple theories have arisen about consciousness and conscious behavior that are still under debate. One such theory is the global workspace theory (GWT), which states that conscious behavior originates in the “global workspace” of the brain with information broadcasted to specific areas in the brain. Thus, the workspace creates consciousness as “a kind of computation for motivating and guiding actions.” GWT theorists believe that consciousness centers around the prefrontal cortex, which is located in the frontal regions of the brain [2].

Some scientists, though, disagree. Christof Koch and Giulio Tononi developed a different theory called the integrated information theory (IIT). In contrast to the global workspace theory, the IIT theorizes that consciousness is innate given a correct “cognitive network.” Instead of defining how the brain creates consciousness, Koch and Tononi focus on the experience to deduce the “properties that a physical system must possess if it is to have some degree of consciousness” [2]. In other words, the IIT focuses more on tracing conscious experiences to their roots, in line with Descartes’s “cogito, ergo sum.” Tononi-led researchers even created a device to gauge how interrelated the brain’s circuits are by electrical stimulation. Results showed a tendency for brain integration to decrease as people become unconscious [5]. Instead of one level of consciousness, Koch hypothesizes that consciousness has certain degrees based on the amount of cause-and-effect power in a system [2]. IIT theorists also believe that consciousness centers in the posterior cortex, which is located in the posterior portions of the brain. These two contradicting theories pose the questions that are of more relevance today than ever: What is the difference between humans and AI? Is our consciousness just information processing, or something more?

Humans Versus Computers and Robots

The ability to self-reflect is commonly seen as both unique and advantageous. As an intelligent species that has dominated the world, humans are one of the few to have this ability and are able to be self-aware–an ability referred to as consciousness. With the development of new technology, however, more and more people are starting to wonder about the actual distinction between humans and computers or robots. Koch’s view particularly hits on this point. He says that “systems in which information is merely ‘fed forward’ to convert inputs to outputs, as in digital computers, can only be ‘zombies,’ which might act as if they are conscious but cannot truly possess that property.” Koch likens this kind of processing to simulating gravity in a video game, which is not the true way to produce gravity [2]. The problem that many scientists are facing has been named “The Hard Problem,” which involves the mystery of why we feel sensations like pain if they even exist in the first place, and what differentiates us from hyper-intelligent robots. If humans aren’t as different from computers and robots as some may believe, then what is stopping AI from achieving the same level of consciousness in the future? Humans are complex living creatures, but we all basically function the way that robots or computers do; we are driven by a center of information giving instructions to other parts of the body. The Hard Problem of Consciousness arose in the 1990s and is still unsolved. Among scientists, some had started to delve more deeply into the mechanisms of consciousness at that time. Interestingly, Francis Crick, one of the first to discover the structure of DNA, and Christof Koch co-wrote a paper theorizing that distinct neurons fire at fixed frequencies and may cause humans’ inner awareness [6]. 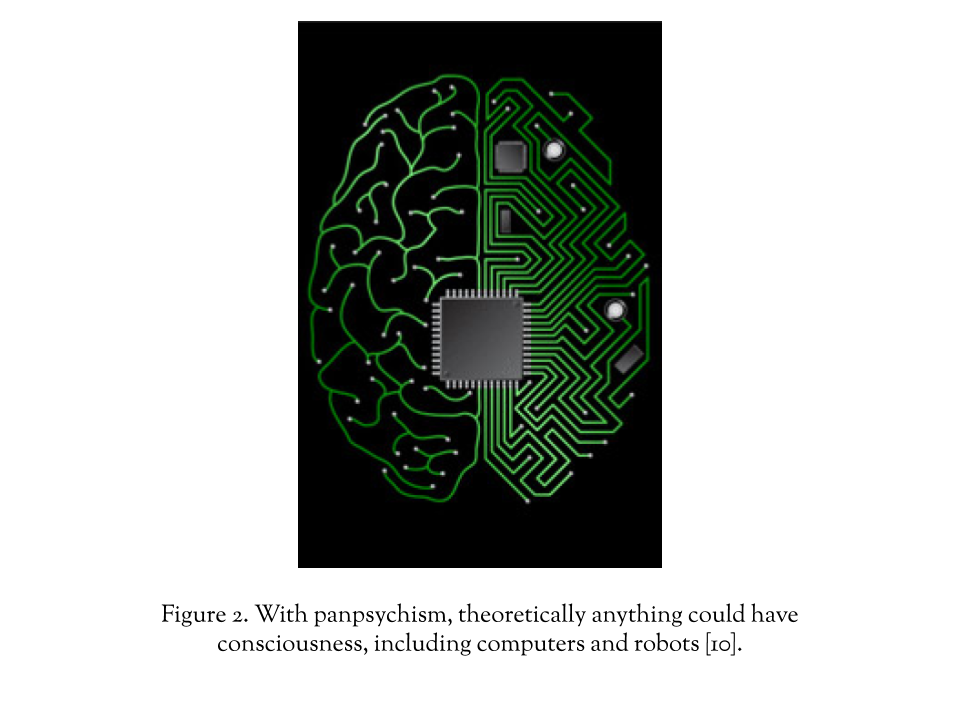 A somewhat unsettling perspective that consciousness is not unique at all to humans or other animals was developed fairly recently. Termed panpsychism is the concept that everything is or has the ability to be conscious, including technology. The argument for panpsychism is based upon the realizations of physicists in regard to the natural existence and order of things in the universe. Like space, mass, or electrical charge, consciousness could just exist everywhere, without solid explanation [5]. With panpsychism, objects and beings like computers and plants could indeed be conscious of our world in a way we don’t yet understand. Even so, consciousness may be an outcome of something even less understood: quantum mechanics.

Having existed for only around 100 years, quantum mechanics is a fairly new field. When it comes to explaining consciousness, quantum theory can potentially answer consciousness problems that traditional neuroscience cannot [7]. The Orch-OR theory is one way that describes how quantum mechanics does this. It states that microtubules, or the small protein tubes that are the support structure for neurons, “exploit quantum effects to exist in ‘superpositions’ of two different shapes at once.” The shapes equal classical information, but the shape-shifting properties of microtubules allow storage for “twice as much information as to its classical counterpart” [8].

However, this theory was flawed, as issues like coherence time made this seem impossible. Scientist Matthew Fisher decided to experiment a little. He gave two groups of rats one of two treatments, either lithium-6 or lithium-7, and saw that the group fed lithium-6 was much more active. Lithium-6 is a stable isotope of lithium that normally has a spin of 1. Simply put, spin defines the extent to which a nucleus experiences electric and magnetic fields; higher spins indicate a greater interaction with these fields. Intriguingly, when lithium-6 atoms are placed into an environment like the brain, a water-based salt solution, the additional protons make them seem to be the lowest spin value, ½, and the least interactive with fields. If there were any sort of quantum control in the brain, lithium’s soothing effects could be explained by the coherent nature of lithium-6 atoms in the brain. Fisher, after extensive calculations, came up with a “candidate qubit”: a calcium phosphate structure called the Posner molecule. He identified a chemical reaction that uses the enzyme pyrophosphatase to break down fat and absorb calcium, which he thinks may “naturally manufacture entangled, coherent states between nuclear spins within Posner molecules.” Essentially, structures made of two phosphate ions would be broken down into two entangled ions, which then form Posner molecules when incorporated with calcium ions [8]. The two theories about how quantum mechanics relates to consciousness are fascinating, and more researchers are finding evidence that quantum effects exist in living beings like in plants for photosynthesis or in migratory birds for navigation [9].

Consciousness remains a relatively unsolved mystery in both the philosophical and scientific worlds. Many scientists, physicists, and philosophers have delved, and are delving into this mystery to uncover answers. From the NCC, GWT, and IIT theories to quantum theories to panpsychism, more explanations and arguments for how consciousness works are budding within the scientific community. With the advances in technology, like quantum computers and AI, more and more scientists consider who or what should be treated as having a conscious mind. Who knows–maybe iPhones have feelings, as Koch conjectures [5]. Hopefully, researchers will continue their efforts to reveal the workings of our minds and make new, revolutionary findings.