Obsessive-compulsive disorder (OCD) is a mental health disorder in which those who are affected have recurring, intrusive thoughts, ideas, and sensations known as obsessions, which manifest a sensation of wanting to conduct repetitive behavior, known as a compulsion [1]. It is a relatively common disorder that affects adults as well as children and adolescents who are typically diagnosed by the age of 19 [1]. The underlying neurobiological mechanisms remain largely unknown with this disorder, and as a result, few first-line pharmacological interventions exist for patients. Current research efforts for OCD aim at better unraveling the neurobiology of the disorder through the exploration of new pharmacological interventions such as neurotransmitter modulators and protein inhibitors, both of which potentially serve as novel treatments for the disorder.

Current medications for OCD target two neurotransmitters in particular: serotonin and dopamine. However, there has been substantial evidence in the potential involvement of another neurotransmitter, glutamate, in OCD. Glutamate is the most abundant excitatory neurotransmitter in the brain and is critical in neuronal transmission in essentially every circuit in the central nervous system. An abnormally high level of glutamate can lead to neuronal damage, and glutamate-modulating therapies have been explored in medical conditions, including stroke and amyotrophic lateral sclerosis (ALS) [2]. Evidence from numerous sources indicates that these irregular levels of glutamate may work to cause OCD. For instance, investigators in Germany at the Ruhr University examined the cerebrospinal fluid (CSF) of individuals with OCD who were not on any medication [2]. The researchers found that those with OCD had higher levels of glutamate in their CSF than healthy controls. Similarly, researchers at Wayne State University have employed magnetic resonance spectroscopy (MRS) to see an increase in glutamate in the brain among those with OCD [2].

In addition, genetic findings provide support to the idea that glutamate imbalance is a potential main causal factor of OCD. Independent groups from the University of Toronto and the University of Chicago published evidence that genetic proteins that carry glutamate in the brain are linked to OCD in certain cases [2]. This glutamate transporter gene, known as SLC1A1, encodes a protein, excitatory amino-acid carrier 1 (EAAC1), that regulates the intracellular and extracellular flow of glutamate of a given neuron. Thus, shifts in this gene potentially lead to alternations in that perpetual flow, increasing the risk of OCD. These findings were important due to the link with numerous other studies that had shown a functional connection between glutamate and OCD. The multitude of brain imaging and CSF studies have demonstrated key differences in the glutamate system between OCD patients and healthy controls, especially in regions of the brain in which the EAAC1 protein is prevalent.

Augmentation is a method that works to improve treatment response and is achieved by implementing medication(s) with varying mechanisms of action along with the primary medication to improve efficacy. This treatment strategy is used for treating neurological and psychiatric illnesses as multiple neurotransmitters are implicated in the pathophysiology of such illnesses, including schizophrenia, epilepsy, and Parkinson’s disease. As several neurotransmitters (glutamate, dopamine, serotonin) are associated with the pathophysiology of OCD, there exists a theoretical rationale for the augmentation of OCD among researchers [3].

Glutamatergic medications are typically used as augmenting agents in OCD, and they work in varied ways to bring about their effects. Thus, they can be described as glutamate modulators, as they can work as receptor antagonists, glutamate co-agonists, reuptake inhibitors, and ion channel modulators that work to bring changes in glutamate transmission [3]. This glutamatergic hypothesis of OCD is especially considered as an attractive proposition for those who have become resistant to the typical selective serotonin reuptake inhibitor (SSRI) treatment for OCD, which is often the first-line agent with regards to treatment for most patients [3]. SSRI medications work by altering and increasing the balance of serotonin levels in the brain, leading to better regulation of cognitive functions that assist  patients with OCD. 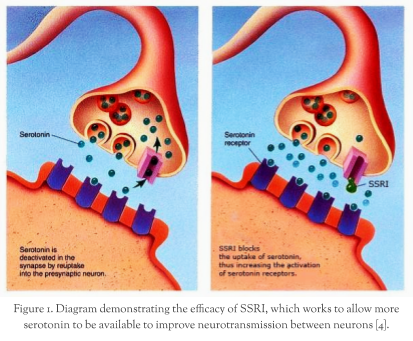 Glutamatergic augmentation agents represent an alternative in treating refractory patients where better-proven strategies have been exhausted. For example, memantine is especially promising with positive results in clinical trials. Ketamine in OCD is in its experimental stages, though encouraging results are shown in its treatment of depression, which is often a comorbidity of OCD. Anticonvulsant medications such as topiramate and lamotrigine have demonstrated a modest benefit, and it is believed that they may work in a small subset of patients [3]. Guidelines recommend the use of memantine and lamotrigine, including a strength of recommendation-level B (meaning one high-quality study shown along with several other studies with certain limitations) [3]. Research of glutamatergic medications aims to distinguish subsets of populations who benefit from the treatment, resulting in a better understanding of the predictors of response and serving as a tool for pharmacological regulation and intervention of treatment-resistant OCD [3].

Role of the Sapap3 Protein

Studies by Duke University have shown that a single chemical receptor in the brain is responsible for a range of symptoms in mice that are reminiscent of OCD [5]. Researchers at Duke University have created a mouse model of OCD by deleting a gene that codes for Sapap3, a protein that helps to organize synapses between neurons to ensure effective communication between the cells [5]. The Sapap3-lacking mouse in the study grooms itself excessively and shows signs of anxiety, similar to the compulsions demonstrated by individuals with OCD. Another study by Dr. Nicole Calakos’ team at Duke found that the overactivity of a single type of receptor for neurotransmitters (mGluR5) was the major driver for abnormal behaviors and compulsions [5]. Consequently, when the researchers gave Sapap3-lacking mice a chemical that inhibits mGluR5, their grooming and anxiety behaviors lessened in intensity almost immediately [5]. In addition, normal laboratory mice that received a drug that boosted mGluR5 activity began the excessive grooming and anxiety behaviors they saw in the Sapap3-lacking mice [5]. Thus, without a functioning Sapap3 protein, the mGluR5 receptor is always on. This makes the brain regions involved in compulsion, overactive. This also indicates that the neurotransmitter mGluR5 should likely be considered for the treatment of OCD, particularly its accompanying compulsions. 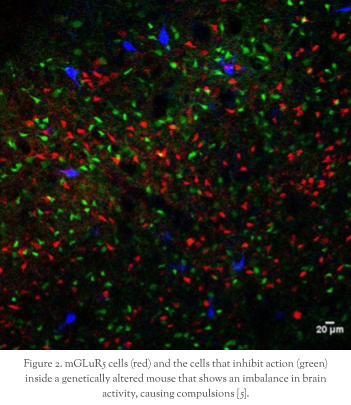 Researchers at the Queen Mary University of London and the University of Roehampton found that higher levels of the protein immuno-moodulin (Imood) are found in the lymphocytes (immune cell) of patients with OCD [6].  Dr. Fulvio D'Acquisto, who led this study, had created transgenic mice to overexpress this protein in their T-cells (a type of white blood cell responsible for the development of autoimmune diseases) and found that the mice displayed symptoms of increased anxiety. Researchers tested the lymphocytes from 23 patients and 20 healthy controls [6]. They found Imood expression was around six times higher in the OCD patients [6].

Mice with high levels of Imood also displayed behaviors characteristic of anxiety and stress, such as excessive digging and grooming. When researchers treated mice with an antibody that neutralized Imood, previously displayed symptoms of anxiety reduced substantially [6]. These findings led the researchers to file a patent application for this antibody to develop potential pharmacological interventions for human patients [6].

Dr. D'Acquisto believes that Imood does not directly regulate brain functions in an expected manner by impacting the flow of neurotransmission. Instead, it influences genes in neurons associated with OCD [6]. Dr. D’Acquisto also stated, “It is early still, but the discovery of antibodies -- instead of the classical chemical drugs -- for the treatment of mental disorders could radically change the lives of these patients as we foresee a reduced chance of side effects" [6]. It may take up to five years before this antibody is used in clinical trials [6].

Current pharmacological treatments for OCD remain relatively inadequate. Those who do respond for treatment have persisting symptoms and a chronic reduction in productivity, as well as quality of life [7]. As mentioned before, SSRIs are considered the first-line pharmacological treatment for OCD, and currently, their combination of efficacy and tolerability is unmatched with other agents available. However, the most promising findings suggest that neurotransmitter modulators (e.g. glutamatergic augmentation), and new protein inhibitors potentially responsible for OCD (e.g. Sapap3, Imood), may work to relieve obsessions and compulsions. Taking these into account will provide an array of pharmacological interventions for OCD that may work as supporting treatments along with SSRIs, or may stand on their own.

However, it should be noted that these alternative treatments pose methodological limitations in regard to current publications [7]. Such limits include small samples that provide less validity and the lack of comparison groups [7]. It is evident that more rigorous studies of these new interventions are needed to determine which alternative treatments are most effective and for whom [7]. The new interventions being developed may also be coupled with existing therapies like cognitive behavior therapy (CBT). The combination of these interventions may work to help affected individuals cope with and modify their compulsions and impulsions in the most efficacious manner [7]. As more research is being done in the pathophysiology and treatment of OCD, clinicians will have a broader array of treatment options in the coming years.