Visual snow syndrome is a neurological disorder characterized by a constant visual disturbance of tiny, flickering dots that can be likened to the static of an untuned television. Visual snow has been very recently introduced into medical literature, so little research has been conducted [1]. The exact causes of visual snow are also unknown. There are other symptoms that accompany the disorder, such as photophobia (sensitivity to light), palinopsia (afterimages), nyctalopia (difficulty seeing at night), and entoptic phenomena (seeing images from within the eye itself), migraines, and tinnitus [2]. Researchers have proposed a theoretical mechanism for the disorder through a controlled analysis of patients with positron emission tomography: hypermetabolism of the supplementary visual cortex (lingual gyrus) [3]. The current population of those affected by visual snow syndrome is unknown. Despite this, have modern research techniques advanced enough to determine the treatment and pathology of visual snow syndrome?

Unknown Cause and Spectrum Quality of Visual Snow Syndrome 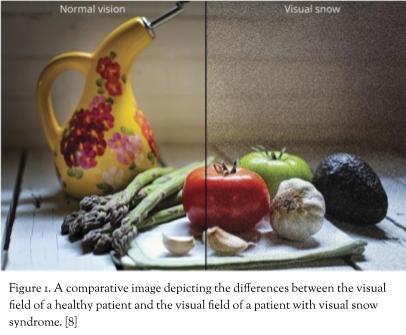 Neurologically, the cause of visual snow syndrome was an anomaly until neuroimaging studies found higher metabolism levels in the lingual gyrus. A study found that patients with visual snow syndrome had brighter colors in the lingual gyrus than shown in the healthy control group through the use of [(18) F]-2-fluoro-2-deoxy-D-glucose positron emission tomography and statistical parametric mapping (statistical significance was defined by P < 0.001). Another way that researchers had observed visual snow syndrome was through visual evoked potential (VEP) tests, which feature measurements of the electrical activities in the brain observed directly in response to visual stimuli. Researchers paired the VEP test with a “double-pulse” test (two visual stimuli presented in quick succession) and found that the VEP revealed gamma-band neural oscillations (a peculiar indication) in the patients of visual snow syndrome. What was concluded from this test was that patients of visual snow syndrome had diminished inhibitory activity in the visual cortex, and therefore an unusual VEP potentiation [5]. 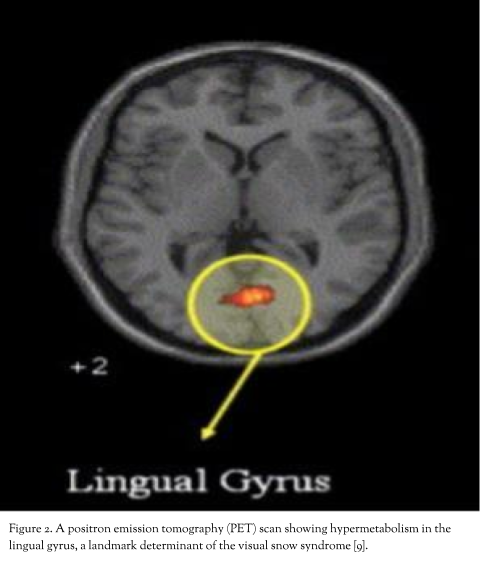 Relationship With Other Diseases

Visual snow syndrome and comorbid migraine auras have been observed to be linked. One study that had 120 patients with visual snow observed that 70 of those patients had typical migraines and 37 had migraines with auras. To clarify, auras are visual phenomena that fall under one of the following conditions: blind spots (scotomas), floating zigzag lines across the visual field, shimmering spots or stars, flashes of light, and vision loss [3]. Comorbid migraines, the study found, aggravates the following symptoms of visual snow syndrome in patients: palinopsia (afterimages), nyctalopia (difficulty seeing under dim light conditions), and entoptic phenomena (visual effects occurring within the eye itself, such as floaters and vascular figures). However, it must be noted that visual snow syndrome and migraine auras are completely distinct disorders. Visual snow syndrome has a clear biological basis, in which there is hypermetabolism in the lingual gyrus, while migraine auras are associated with cortical hyperexcitability in areas surrounding the lingual gyrus which accompany photophobia, a prevalent symptom of migraine aura.

In addition to this, visual snow and tinnitus have also been observed to be linked in a similar fashion. In a study, roughly 63% of the visual snow patients also reported continuous bilateral tinnitus, suggesting an underlying, common pathophysiological basis [4]. However, no studies have yet found a definitive cause of the relationship between tinnitus and visual snow syndrome. 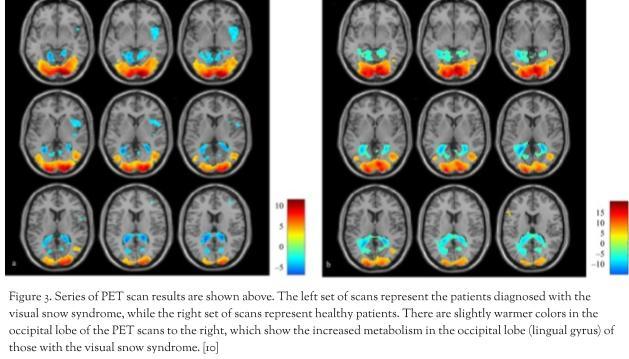 Currently, there is no cure for visual snow syndrome. However, there are treatments available that diminish the severity of the disorder and help ease patients’ quality of life. A cocktail of three oral drugs has been shown to be effective in reducing, but not ending, migraine aura and tinnitus: lamotrigine, acetazolamide, and verapamil. This cocktail is given in low doses and is gradually increased for 4 weeks. Other treatments have included a cocktail of lamotrigine, valproate, topiramate, acetazolamide, and flunarizine, which was found to be slightly effective. Nevertheless,  lamotrigine was found to be the most effective individual prescription to treat the symptoms of migraine auras in visual snow syndrome [6].