The Dynamic Mind: An Overview of Neuroplasticity

Neuroplasticity, a phenomenon describing the brain's capacity to change and adapt, refers to the morphological changes in the brain that occur due to an individual’s interactions with the environment. Throughout the course of one’s life, the brain develops synapses and circuits between neurons that reorganize to respond to an individual’s adapting needs. This process allows one to learn and adapt to new experiences. Neuroplasticity is also vital in higher cognitive functioning, including processes relevant to memory and learning. This indicates neuroplasticity can act as the basis for cognitive and physical rehabilitation practices that work to rebuild connections among neurons [1]. This article provides an overview of the background and neurobiology of neuroplasticity, as well as its applications.

The term “neuroplasticity” was first coined in 1948 by Polish neuroscientist Jerzy Konorski to describe changes in neuronal structure. However, this term was not widely used until the 1960s [2]. Until the 1960s, researchers took part in the notion that changes in the brain could only occur during infancy and childhood [2]. They believed that the brain’s state was mostly permanent by early adulthood [3].

In the 1920s, Karl Lashley found evidence of changes in the neural pathways of rhesus monkeys [3]. By the 1960s, researchers began to explore cases in which older adults who had suffered strokes could regain functioning, demonstrating that the brain was a lot more malleable than they had previously believed [3].

Due to modern advances in technology, researchers can get a look at the brain's intricate inner mechanisms. As the study of contemporary neuroscience flourished, researchers were able to conclusively demonstrate that people are not limited to the mental abilities they are born with, and that those facing damage to their brains are indeed capable of remarkable change.

The brain establishes a series of neural pathways when it is engaged in new experiences and learning. These neural pathways, known as circuits, are routes made of interconnecting neurons. These routes form in the brain typically through daily emphasis and practice. The neurons within a neural pathway communicate with each other through synapses, and these communication pathways have the profound ability to regenerate throughout one’s life. Each time we gain new knowledge, experience, or exposure to a given thing, through repeated practice, the synaptic communication between the relevant circuit of neurons is strengthened [4]. Strengthened connections indicate that the electrical signals between neurons travel more efficiently when using a new pathway.

For instance, when a birdwatcher tries to recognize a bird, relationships are being established between neurons. Neurons located in the visual cortex determine its color, the auditory cortex identifies its tune, and the hippocampus (responsible for memory) recalls the name of the bird from these observations [4]. Revisiting this neural circuit and re-establishing neuronal transmission between the implicated neurons at each new attempt is what enhances the efficiency of synaptic transmission [4]. Communication between the relevant neurons is then facilitated, improving the speed of the related cognitive function [4]. Thus, synaptic plasticity is likely the pillar in which the brain’s malleability resides.

There exist four main types of neuroplasticity adaptations. Long-term potentiation describes the strengthening of synapses through recurring activities such as studying information or practicing motor skills [5].  This type of neuroplasticity is strongly associated with learning and memory. On the other hand, long-term depression describes the weakening of synapses that are not being used in a coordinated, well-timed manner. This typically occurs when synapses fired by neurons are not fired within 20ms in a coordinated way between the presynaptic and postsynaptic terminals [5]. In addition, neuroplasticity research has studied long-term depression’s role in memory loss for neurological disorders such as Alzheimer’s Disease [5]. Synaptogenesis describes the creation of new neural connections, as described in the overview of synaptic plasticity [5]. This occurs when the brain is exposed to new environments and experiences. 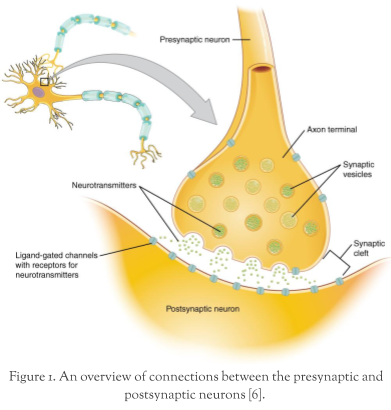 Unlike synaptic plasticity, which enhances communication at the synaptic sites between existing neurons, neurogenesis is the creation of new neurons in regions of the brain such as the hippocampus (memory formation) and olfactory bulb (odor input). Neurogenesis occurs at high rates in the young brain and can continue, albeit minimally, into adulthood [5].

Neurogenesis occurs when stem cells located in the dentate gyrus of the hippocampus and possibly in the prefrontal cortex, divide into two separate cells: a stem cell, and a cell that will form into a neuron. The newly formed neurons migrate to regions of the brain where they are needed, and thus have the ability to allow the brain to replenish its own supply of neurons. Animal and human research has shown that sudden neuronal death (for example after stroke) is a trigger for neurogenesis [4]. 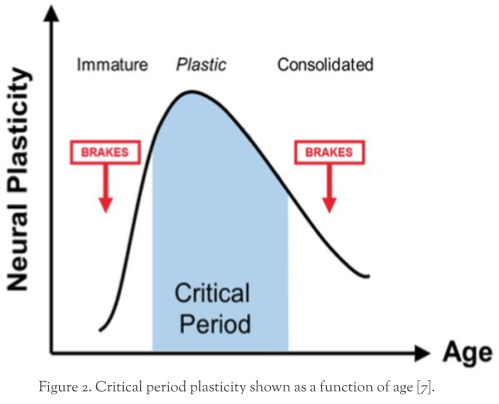 There exist two types of plasticity that shape the developing brain. Experience-independent plasticity describes everything that occurs within the brain during the prenatal developmental phase. This is when neuronal connections and brain formation are processes driven by complex genetic instructions. During this phase, neurons that fire together make some structures stronger and parts of the brain more prominent than others, whereas those that do not coordinate will die out. For instance, a lack of visual stimuli in the critical stages subsequent to birth may lead to impediments in the processing of input from the visual cortex, possibly resulting in eye disorders such as amblyopia (where both eyes are unable to align and function in unison) [7]. This shows a lack of experience-independent plasticity [7].

Experience-dependent plasticity helps neurons form synapses independent of other processes that may be occurring in the brain [7]. For example, the formation of the retinal ganglion of the eyes consists of axons coming from the retina, which are initially sending branches for both eyes but gradually form their own neurons for each branch. The axons of each pathway coming from the retina fire synapses that eventually create neural circuits independent of those in the other eye. Experience-dependent plasticity is often seen in affected brain morphology when different situations occur, such as moving to a new region, learning difficult math problems, or suffering from injury. These daily challenges either increase or decrease synapses, and shape the morphology of the brain while they are functioning [8].

There are a multitude of applications of neuroplasticity within the clinical context, which have both yielded results and shown potential in serving as strong interventions [9].

In addition, deep brain stimulation (DBS) uses electrical stimulation to induce neuroplasticity and produce behavioural changes through implanted electrodes. Two hypothesized mechanisms of action are that DBS creates a functional lesion via inhibition within the stimulated region and, and also that DBS activates the neuronal network connected to the stimulated region, which leads to the modulation of pathological network activity [9]. The former mechanism is consistent with the immediate effects of some applications of DBS (such as the effects on motor function in Parkinson's disease) [9]. The latter is likely to be more consistent with gradual effects that are induced by DBS as opposed to immediate ones (such as circuit retraining), which are also seen in neuropsychiatric disorders [9]. The most notable of these disorders include treatment-resistant depression (TRD) and treatment-refractory obsessive-compulsive disorder (OCD).

Directions for future research in clinical applications may include tailoring plasticity-based therapies based on individual patient measurements such as the distribution of disease [9]. Therapies under study to promote neuroplasticity have been examined one at a time, however with greater understanding these therapies can be expedited by being examined in combination (such as task-specific plasticity training coupled with stem cell therapy) [9]. A better understanding of treatment mechanisms at every level as well as the underlying neurobiology of neuroplasticity will improve the development of both preventive and therapeutic interventions.

Neuroplasticity allows for rehabilitation techniques to foster improved functional outcomes in age-related neurological conditions. Thus, the brain’s malleability can be manipulated in both the healthy and diseased brain, and using its ability to create and lay down new pathways can play a large role in rehabilitation as well as the quality of life. It is clear that the human understanding of the nature of brain development has advanced a long way in the past century, though we have begun to understand the contributing factors and mechanisms that regulate this development. Understanding these mechanisms is necessary in finding treatments for neurodevelopmental disorders to initiate early intervention that will reverse the otherwise anticipated pathology.