Editing the Nervous System: Applications of CRISPR in Neuroscience

Gene editing brings about a sense of science-fiction-like possibilities, where it is possible to delete memories or add an extra limb. This promising technology has potential, particularly within the field of neuroscience, be it in enhancing current research methods and study designs or in serving as a treatment for a variety of neurological disorders. That being said, CRISPR does hold challenges that researchers are looking to overcome [1]. There is plenty of progress to be made in CRISPR editing with regards to its applications in neuroscience, and it is crucial to engage in this cross-field to make strides in our knowledge and abilities. This article aims to provide an overview of the potential application methods of CRISPR genome editing in the field of neuroscience, as well as their limits.

CRISPR, which stands for Clustered Regularly Interspaced Short Palindromic Repeats, is the newest version of a large scope of gene editing techniques [1]. Gene editing describes the manipulation of individual genes in organisms, transforming a process that takes generations into something that only takes a fraction of that time [1]. An example of this is the fact that scientists are able to breed a black mouse with a white mouse, locate and eliminate the genes for white fur within the mouse embryo, and ensure that the baby mouse grows black fur [2]. Researchers employed many different technologies to rewrite the genetics of organisms in this way before the year 2000, though they were complex, expensive, and specific to a single plant or animal [2]. Fast forward to CRISPR-Cas9, a new and improved gene-editing technique based on the natural defense mechanisms found in bacteria [2]. CRISPR-Cas9 uses the enzyme Cas9 to identify and eliminate predetermined genes and DNA sequences [2]. This technique is cheaper, more effective, involves an adaptable form of gene manipulation, and works in every model organism [2]. 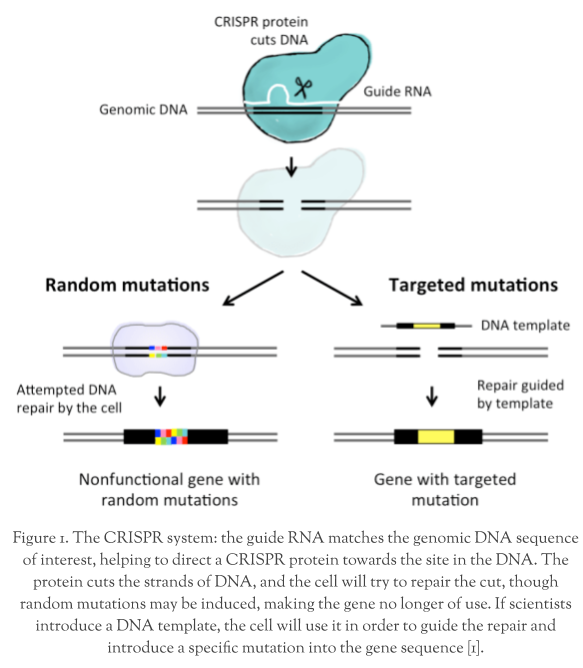 CRISPR’s system consists of two parts: a protein borrowed from bacteria that cuts DNA, and a guide RNA that informs the protein on where to do the cutting. Once the DNA within the gene being targeted is cut, the cell will try to repair it on its own, but will typically make a mistake that causes the gene to be disrupted and no longer function. Scientists may also introduce a third component into the CRISPR system in which the DNA template informs the cell on how exactly to repair the cut DNA, introducing a  specific mutation that alters the gene [1]. 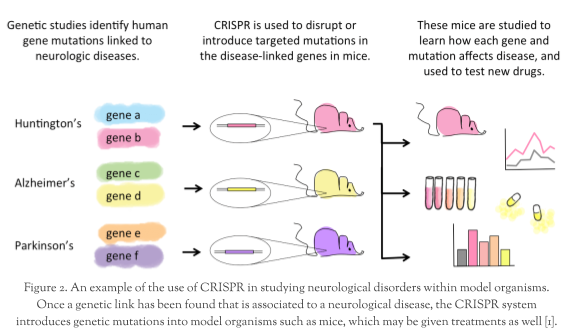 In the past few years, scientists have been using gene sequencing to uncover genes that play significant roles with regards to brain development and neurological diseases, including, but not limited to, Alzheimer’s disease and schizophrenia [1]. Some neurodevelopmental disorders, such as Fragile X Syndrome, are known to be caused by mutations in a single gene, whereas conditions like schizophrenia involve a multitude of genes and are complex. This means a large number of people have to be sequenced before scientists can uncover which genetic differences are linked to their respective diseases. Currently,  there are existing clues for genes that may determine the number of disorders, including OCD, autism, and major depression. The next step is to figure out if cutting any of these genes can cause these diseases, which CRISPR is considered to be the ideal technology for [1]. As the brain is intricate, consisting of billions of synapses between neurons, it is crucial to consider genetic changes in an animal brain before moving onto human trials. If one believes a specific mutation in the Huntington gene causes Huntington’s disease (a neurodegenerative disorder), it is possible to introduce that mutation into the embryo of a mouse using the CRISPR system. Thus, the mice and their offspring can be studied in order to observe potential symptoms of Huntington’s disease (e.g. loss of motor control) indicating that the mutated gene is responsible.

Studies have shown that disorders like Huntington’s diseases are 100% genetic and 100% caused by one gene; CRISPR-based therapies will be developed over the next ten years in order to create novel treatments for this disorder [3]. For more complex brain disorders, CRISPR will be vital in helping researchers better understand their underlying genetic mechanisms [3]. Thus, the CRISPR system may be implemented by introducing the Cas9 proteins and RNA guides into the brain for genome editing, in order to enable precise genetic dissection of neuronal circuits, which is also convenient for modeling a multitude of neurological disorders [4].

CRISPR may sound like the perfect method in curing all neurological disorders known to mankind. While its systems do hold potential, it is far from perfection. The human genome is large, and multiple stretches of DNA are similar enough that the CRISPR system will likely make unintentional cuts within the DNA. This would result in unintended mutations that arise, which would directly affect the health or even survival of the affected animal [5].

Currently, CRISPR allows scientists to easily inject its components into mouse embryos, although it does not work in an adult rat brain, due to the inability of CRISPR to cross the blood-brain barrier (BBB) [5]. As an attempt to resolve this, research attempts for BBB methods include in vitro (static and dynamic models, meant for permeation), in vivo (microdialysis, measurement of extracellular fluid concentrations), and in situ (brain perfusion scan to measure blood uptake) [5].

In addition, CRISPR is a relatively new technology that we have limited knowledge about. Perfecting this style of biological engineering will result in opportunities to eliminate anomalous genes if we are able to nearly guarantee the specificity and precision needed for complex neural systems [5]. This is a big hurdle to overcome, and the failures in gene editing may not even be apparent right away, resulting in potential alterations of the genetic composition of the animal down the family line [5].

The protein Cas9 has already been employed in altering genes in species such as killifish and salamander, which are often used to study aging and tissue regeneration, respectively [6]. This opens up the possibility of developing models in other species of interest relevant to neuroscience research, including social insects or songbirds, which have been hard to deal with when it comes to genetic modification [6].

To make this happen, existing techniques for delivering Cas9 and RNA guides to the brain need to be optimized and the new methods being developed need to reach sufficient levels of specificity and efficiency. The latest methods of approach for stimulating gene insertion should be well-established, with the confidence to say that we are able to avoid as much risk as possible [7]. It is also necessary to take into account the safety and ethical concerns of gene editing technologies [7]. The consensus remains that more in-depth studies are necessary to elucidate the true toxicity and efficiency of CRISPR within the central nervous system over prolonged periods [7].

However, the gene-editing techniques based on CRISPR-Cas9 will help us better understand the logistics and inner complex mechanism of neuronal circuits, as well as uncover some of the biggest mysteries that comprise a variety of neurological disorders.