Why We See Faces Everywhere: The Pareidolia Phenomenon

Pareidolia is a visual hallucination based on seeing recognizable patterns in objects and abstract installations [1]; a similar phenomenon is observed in auditory hallucinations. Most people have probably never heard of pareidolia, however nearly everyone has experienced it in some form. In our daily life, we are exposed to a lot of faces, so it is unlikely that we recognize all of them correctly. Our quick process of face perception makes us see faces in face-like objects. To achieve this effect, our brains need only two dots and a correctly arranged line. A simple example of ingenious use of face perception are the commonly used emoticons, which not only show faces but also represent feelings. There is also a wide spectrum of applications of the pareidolia phenomenon in medicine. The presence or absence of pareidolia in some cases may serve as an auxiliary diagnosis and it can also be a subject of research [2].

As we know, the world that surrounds us consists of many shapes, figures, and polygons; one of them is the human face. Have you ever seen faces or other common shapes in clouds or treetops? If the answer is yes, you have in all probability experienced the phenomenon of pareidolia. Nevertheless, our minds are not the same, so some of us identify certain pareidolia hallucinations as meaningful while others see them as meaningless.

Studies show that we see faces in a slightly different way than other non-facial objects; our brains process a significant part of facial signals subcortically, non-intentionally, and irrespectively of visual attention. Our brain can process face stimuli independently of visual attention (likewise with pareidolia-causing shapes), in contrast to non-face stimuli. It is also worth mentioning that both real faces and pareidolia objects are mainly processed in the FFA (Fusiform Face Area), which is activated earlier during observation of facial structure than during observation of non-facial objects (∼130ms for real faces,∼160 for pareidolia causing objects) [3]. This means that our brain does not need a reinterpretation process to recognize faces because the whole action happens almost simultaneously. Moreover, humans focus their awareness much more on anthropomorphic-shaped objects. An example from everyday life could be a situation when you are able to remember the face of a person you just met, but are unable to recall their name. This happens because the perception of a face is one of the most developed human skills and it evolved before the ability of speech recognition and usage [5]. 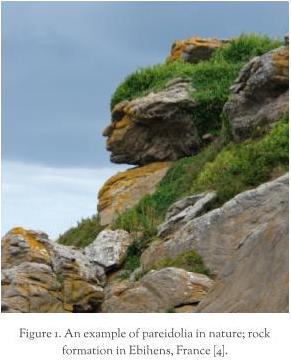 The Influence of Various Factors of Pareidolia

The phenomenon of pareidolia was captured by a Swiss psychiatrist and psychoanalyst Hermann Rorschach. He made use of it in the Rorschach inkblot test, which is commonly used in psychology during diagnosis for symptoms of impulsiveness or proneness to violence. This test consists of ten tables with colored and not colored inkblots. Standardized norms allow psycho-diagnosis of patients through their responses. Interpretation and the results of the test depend on focusing on whole blots or just parts of them [6]. However, as the present study shows, scores may differ not only because of mental illnesses or a type of psychosis, rather they also depend on the environment in which the examined people live. Results (objects seen by patients in blots) differ for people from divergent backgrounds, different primary languages or levels of education [8]. 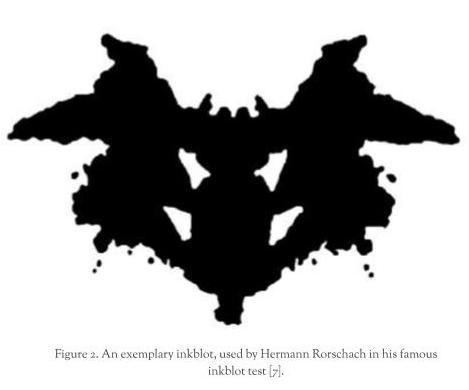 A similar research difference is noted in pareidolia itself. According to the scientists from the University of Helsinki, people who profess faith are more likely to share acquiescence bias opinion (tendency to choose a positive answer; in this situation perceive faces in ambiguous images) and see faces in face-like objects more commonly than people who are atheists. Moreover, believers more often detect faces in no face-like areas, which means they are more susceptible to false alarms and have more extensive criteria in the perception of faces; they were more accurate in seeing faces in pictures with pareidolia-causing shapes [9].

Furthermore, the intensity of pareidolia does not only depend on what we believe in and who we are but also on diseases we have. There is a difference in seeing faces in face-like objects in people diagnosed with neurological diseases, like DLB (Dementia with Lewy Bodies) or PD (Parkinson’s Disease). Pareidolia could be a vicarious indicator of hallucinations seen by patients, which appears mainly in the form of faces and animals. Patients suffering from DLB demonstrated pareidolia more often than patients with PD, Alzheimer’s disease, or healthy adults. However, it is difficult to elaborate if patients experienced pareidolia itself because in diseases like PD, hallucinations and delusions are common (mostly in cases with dementia) and even sometimes healthy individuals do not recognize pareidolia as pareidolia, due to its common presence in our lives [10].

Parts of the Brain Responsible for Pareidolia

The FFA (Fusiform Face Area) is the part of the brain where most of the face perception process takes place. It is located in the fusiform gyrus, in the inferior temporal cortex (the bottom part of the temporal lobe). Considering the brain lateralization, it is generally larger in the right hemisphere. Nevertheless, during observation of faces and pareidolia stimulating images, brain activation can also be observed in PFCX (Prefrontal Cortex), V1 and V2 areas (Visual Cortex) [11]. During the investigation of the brain and searching for a part responsible for processing face images using electroencephalography (EEG) and functional magnetic resonance imaging (fMRI), a difference between normal and abnormal patients’ FFA activity could be seen. Although the decreased activity in FFA is discernible in individuals who have mental disorders like SAD (Schizoaffective disorder) or in those who abuse specific types of stimulants, the pareidolia and face recognition process is similarly noticeable as in healthy individuals [13].

In the previous study, researchers found that the pareidolia and the face perception process starts to develop in infants. Infants older than 6 months have a sound-mouth association; it was supported by the study in which infants were looking at the natural place of the mouth on four-blobs face during a sound presentation. It also showed that the intensity of pareidolia experience and ability to perceive faces in objects increases with age [14]. This implies that they recognize face layout while looking at the real face as well as in simplified face-like objects like specific paintings, abstract structures, or the facial schemes mentioned above.

Our brain, trying to find a hidden message in illogical audio, produces random meanings and creates words or sentences. That’s why we can hear seemingly normal conversations instead of some computer-generated or even traffic sounds and misinterpret them as music or dialogue. The brain recognizes similarity in sounds we have heard in our lives mere seconds before and some random voices. Auditory pareidolia should not be confused with auditory hallucinations which differ in the cause of their creation. Auditory hallucinations are usually consequences of diseases such as Alzheimer’s disease and other types of dementia, schizophrenia, neurological conditions, cerebral tumors or alcohol and drug consumption [15]. However, the cause of auditory pareidolia is a random stimulus, from which people build strings of words or letters and perceive them as meaningful. Generally, pareidolia is based on stimulus which exists in contrast to hallucinations that can occur even in perfect silence.

The genesis of auditory pareidolia could potentially be a part of the auditory pathways (which we can be distinguished into e.g. Brodmann areas 41 & 42, associative cortex), where our subconscious and other elements work [16]. Our sound reception of unconscious sound stimuli mainly depends on our past experiences (similarly to visual pareidolia), one of the factors of this being that we try to associate things we discover and come up against the first time with things we are close to.

Auditory pareidolia can have its basics not only in the physiology of the brain but also in the frequency of sound. This phenomenon is called the Doppler Effect, which refers to the differences in the frequency of the sound wave. During the approach of the sound source, it seems to be higher than when it is receding (of course, in both cases the distance from the sound source is identical) [17]. A similar effect could be noticed when the listener is moving relative to the source of the wave. This means that pareidolia can occur not only because of the neurophysiology of the brain but also because of the laws of physics.

Pareidolia, being a gripping phenomenon, which allows us to perceive some random objects and sounds as meaningful, could also be an auxiliary diagnosis for detecting brain diseases and abnormalities (as in the case with The Rorschach inkblot test). On the grounds of the presence and the intensification of the pareidolia phenomenon, mental disorders and diseases like PD or DLB can be diagnosed. However, we have to remember that the pareidolia in itself is not a sign of any mental disorder. The circumstances in which people prefer to look at anthropomorphic shapes have been used in marketing and product design, one of the simplest reasons being a greater, of course subconscious, demand for products. It is interesting to think about how something you perceive as significant could only be an intriguing cloud.

I am a high school student from Poland. I fell in love with neuroscience when I started volunteering at the neurology ward at the local hospital. Currently, I am conducting research on Alzheimer's Disease, and a possible application of peptides from the melanocortin family as disease progression regulators. Besides neuroscience, I am also interested in geography, martial arts, and music.