Alzheimer’s disease has been described as the cognitive impairment of an individual due to the formation of senile brain plaques (SP), and neurofibrillary tangles (NFT) [2]. Researchers have hypothesized a multitude of possible causes for the pathogenesis of Alzheimer’s disease (AD), however strong evidence has been found suggesting that environmental factors influence the progression of AD. These environmental factors include, but are not limited to, exposure to metals such as aluminum, copper, zinc, selenium, manganese, and iron [9]. This paper will review the clinical literature regarding the intricate relationship between copper (Cu) neurotoxicity and the Amyloid Precursor Protein (APP) involved in AD pathogenesis.

Alzheimer’s disease has been defined as the cognitive impairment of an individual due to the formation of senile brain plaques (SP), and neurofibrillary tangles (NFT) [2]. These defining features are regarded as the main pathological symptoms of Alzheimer’s disease since the first description of the disease by Alois Alzheimer in 1907 [2]. More specifically, Alzheimer’s disease is defined by the deposition of β-amyloid (Aβ) plaques, the accumulation of neurofibrillary tangles, and the loss of neurons and synapses in select areas of the brain, specifically the cerebral cortex [16]. Many patients with Alzheimer’s show unique variations in the persistence of these pathologies, thus creating difficulties in establishing a single theory for the causes of the disorder.

There are various hypotheses that researchers believe can explain Alzheimer’s disease; however, the exact cause of the disease’s progression is unclear. Possible causes are proposed to be (1) acceleration of aging, (2) degeneration of anatomical brain pathways, (3) environmental factors, (4) genetic factors, (5) a metabolic disorder resulting from mitochondria dysfunction, (6) vascular factors such as a compromised blood-brain barrier, (7) immune system dysfunction, and (8) infectious agents [2].

Although the acceleration of aging and brain degeneration are plausible hypotheses for the development and progression of Alzheimer’s disease, many researchers have found strong evidence in supporting the role  environmental factors in influencing the progression of Alzheimer’s. These environmental factors include exposure to various metals such as aluminum, zinc, copper, manganese, iron, and selenium [9].There is a debate within the scientific community on whether or not metal toxicity appears in the brain as a result of Alzheimer’s disease, or if metal toxicity of the brain precedes the disease [8]. The increase in recognition of metal contaminant levels in the air, water, soil, sediment, and food has prompted researchers to distinguish the difference between “bioavailability” and “bioaccessibility” [12]. Metal bioavailability implies the presence or maximum amount of metal in ingested food, water, soil, or sediment particles that can be released during digestion [12]. Conversely, metal bioaccessibility is the ability of the ingested metals to be absorbed and transported across the intestinal wall and transferred into the bloodstream [12].

Researchers have hypothesized that inorganic copper ingested from drinking water, using copper plumbing, and using bioaccessible vitamin and mineral supplements containing the metal is a possible cause of Alzheimer’s disease [4]. Although copper is an essential organic element that is needed for energy production by the enzyme cytochrome c oxidase, ingesting inorganic copper can lead to metal dyshomeostasis in the brain, an imbalance or breakdown of the brain's normal function [5]. Copper is an integral component of cuproproteins, and is required for many physiological functions, such as energy production, the scavenging of free radicals, connective tissue production, iron mobilization, and neurotransmission [13]. Researchers propose that Alzheimer’s disease could even be classified as a copper-overload disease much like Wilson's disease, which is a copper metabolism disorder in the brain [5,3]. Research has shown that there is a link between the interaction of copper, the APP gene, and the acceleration of Alzheimer’s disease.

The APP gene, also known as the amyloid precursor protein, located on chromosome 21, was first identified in 1987 by laboratories independently using partial protein sequence information obtained by the Glenner and Beyreuther/Masters laboratories several years earlier [14]. APP processing generates the β-amyloid (Aβ) peptides, which are deposited as the amyloid plaques in the brains of individuals afflicted with Alzheimer’s disease (Figure 1) [16]. The liberation of Aβ from APP requires the action of β- and γ-secretases which process APP at amino-terminus and carboxyl-terminus of the Aβ sequence [16]. Point mutations and duplications of APP are causal for a subset of early-onset familial Alzheimer's disease, and roughly 5-10% of Alzheimer’s cases are familial with an autosomal dominant inheritance of mutations in APP [16]. Point mutations and duplications of APP can cause early onset of familial Alzheimer’s disease; however, although mutations in APP are found in rare cases, they are nevertheless important because they provide the necessary evidence that APP and Aβ play a central role in AD pathogenesis [14]. 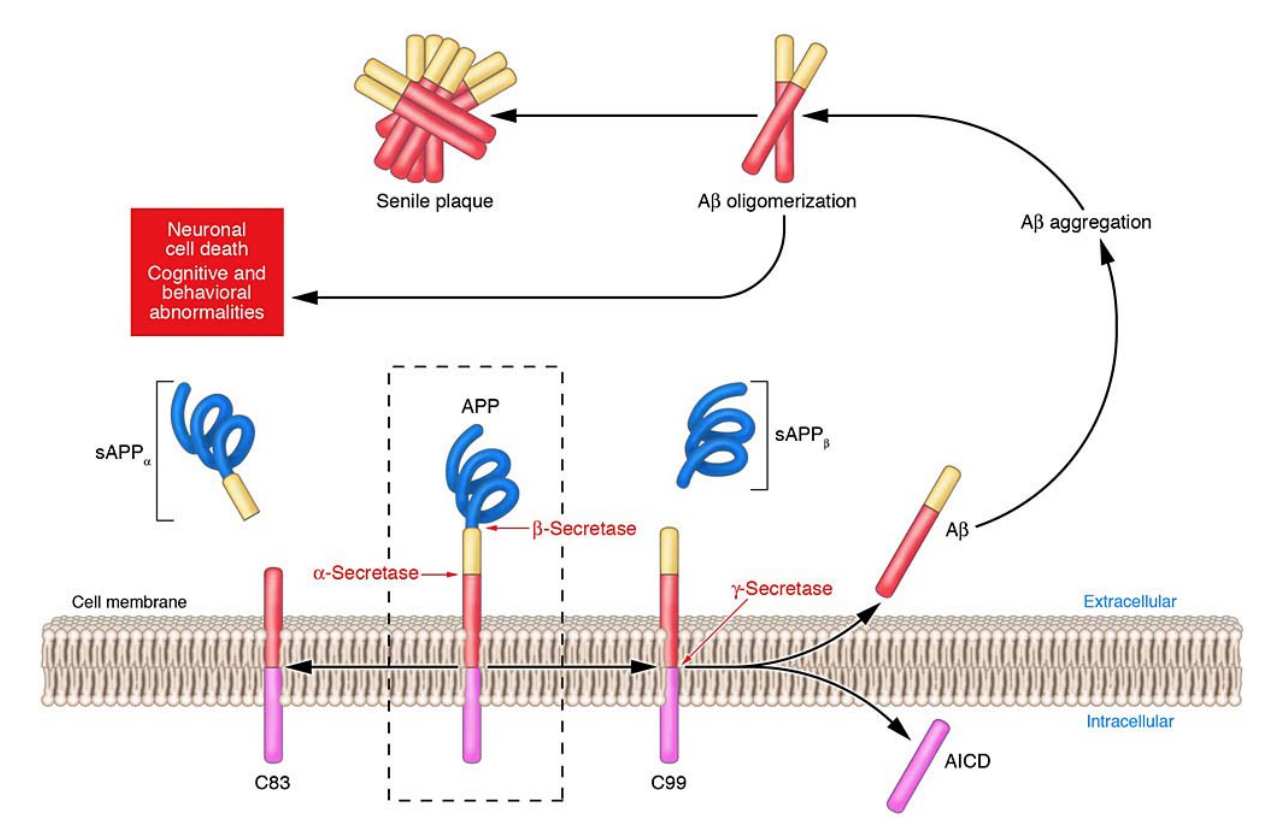 Figure 1: The process showing the creation of senile brain plaques from amyloidgenic pathways of APP processing {17}.

Although the literature concerning the role of the APP gene in Alzheimer’s disease is vast, there is also a large amount of research concerning the interaction between the APP gene and copper in relation to Alzheimer’s disease. APP molecules contain metal-binding sites for copper and zinc [15]. The activity of the copper-binding domain (CuBD) is unknown. However, it has been found that APP reduces Cu(II) to Cu(I) and this activity could promote copper-mediated neurotoxicity [15]. Cu(II) refers to copper in the 2+ oxidation state, while Cu(I) refers to copper in the 1+ oxidation state [1].

The expression of APP in the brain suggests that it could have an either a direct or indirect role in neuronal metal homeostasis [15]. Metal homeostasis in the brain is characterized as the appropriate amount of organic, bioaccessible metal needed for brain function and activity [11]. Conversely, metal dyshomeostasis is a disruption of brain function and homeostasis due to high amounts of metals in the brain [11]. It is believed that the relationship between APP and inorganic copper in the brain produces metal dyshomeostasis during Alzheimer’s disease [15]. In Alzheimer’s disease, the reduction of Cu(II) to Cu(I) by APP involves an electron-transfer reaction and could also lead to a production of hydroxyl radicals [10]. This could mean that the copper-mediated toxicity of APP-Cu(II)/(I) complexes may contribute to neurodegeneration in individuals with Alzheimer’s disease [10].

In a case study done by Acevedo (2011), it was  found that copper promotes APP trafficking in cultured polarized epithelial cells and neuronal cells (Figure 2). Previous research had demonstrated that copper increases the level of APP at the cell surface. The purpose of the research presented in this 2011 study was to show that out of the three most abundant trace elements found in the human body, namely iron, copper, and zinc, copper played the most influential role in relation to the APP gene [1]. The article clearly shows that iron and zinc had a minimal effect  on the APP gene {1}. Researchers used live-cell imaging and endocytosis assays to study the relationship between copper and the APP gene [1]. In doing so, they found that increased copper promotes an increase in cell surface APP by increasing its exocytosis and reducing its endocytosis [1].

Figure 2: Images showing 5 μm of copper injected in the brain causes APP relocalization from a predominant perinuclear location to neurites, as indicated by the white arrows {1}.

In SH-SY5Y neuronal cell lines and primary cortical neurons, the researchers found that copper promoted a redistribution of APP from a perinuclear localization to a wider distribution, including to neurites [1]. SH-SY5Y cells are a human-derived cell line that is often used as in vitro models of neuronal function and differentiation [1]. The findings show that copper modulates APP metabolism [1]. Furthermore, researchers found that a decrease in intracellular copper down-regulates the APP gene expression, and elevated cellular copper levels result in the up-regulation of APP gene expression [1]. It was also demonstrated that in both neuronal and non-neuronal cell models, APP traffics from the Golgi to intracellular compartments and the cell surface in response to increases in intracellular copper, but not zinc or iron [1].  This is potentially due to an increase in the rate of APP exocytosis with a concomitant reduction in its rate of endocytosis [1].

In another study by White and colleagues (1999), the direct or indirect role between copper, the APP gene, and neurotoxicity was examined. This was done  by measuring copper, zinc, and iron levels in the cerebral cortex, cerebellum, and selected non-neuronal tissue from APP and APLP2 knockout mice using atomic absorption spectrophotometry [15]. The APLP2 gene is a member of the APP gene family and contains heparin-, copper- and zinc-binding domains at the N-terminus, BPTI/Kunitz inhibitor, and E2 domains in the middle region, and transmembrane and intracellular domains at the C-terminus [15]. The APLP2 gene is required to mediate neuromuscular transmission, spatial learning, and synaptic plasticity [15]. A knockout mouse is a laboratory mouse in which researchers have inactivated or “knocked out” an existing gene by replacing it or disrupting it with an artificial piece of DNA [15]. Researchers used knockout mice and control mice which they labeled “wild-type” (WT) mice [15].

White (1999) suggests that the identification of zinc and copper metal-binding sites on the APP and APLP2 proteins suggest a possible role in biometal homeostasis. To test this, the levels of copper, zinc, and iron in the brain and other non-neuronal tissues of knockout mice and WT mice were measured [15]. They found that APP and APLP2 expression significantly and specifically lowers copper levels in the cerebral cortex of adult mice, as well as their liver [15]. The increased copper levels in the cerebral cortex and liver were not an artifact of the “knockout” procedure [15]. The knockout mice and the WT mice were of the same background, thus indicating the effect found is protein-specific [15]. This study is different from the study done by Acevedo (2011) because White (1999) explored the relationship between the APLP2 gene and copper as well as the relationship between the APP gene and copper. This was done because APLP2 also contains a copper-binding ectodomain.  However, it was shown that APLP2 had a smaller effect than APP on copper levels in the cerebral cortex [15].

As copper has a high capacity to generate free radicals, even at low concentrations, copper metabolism must be tightly regulated to prevent tissue damage in the brain [15]. The study done by White (1999) provided valuable insight into the relationship between the APP gene, APLP2 gene, and copper by demonstrating that APP and APLP2 are involved in modulating copper but not iron or zinc. However, it is still not clear how this process occurs, or which tissues or fluids are  the predominant site of interactions between copper and APP or APLP2 [15]. Cells in the brain and liver express relatively high levels of APP, and the release of cellular APP/APLP2 with bound copper may provide a means of removing excess copper from certain cell types [15]. Researchers explain that due to the highly conserved sequence homology of the CuBD between species, the results from this study show that it is very likely that APP has a similarly important role in copper homeostasis in humans [15]. The perturbation of this function could have important implications for disease initiation/progression since the cortex is commonly affected in patients afflicted with Alzheimer’s disease [15].

I'm a MA student studying biological anthropology with the hopes of getting my Ph.D. and studying neurobiology.